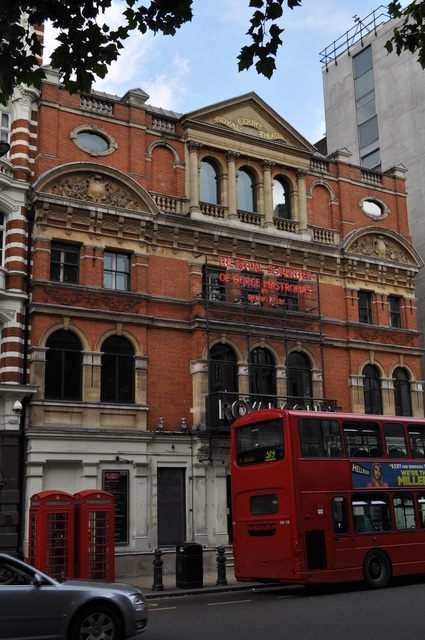 Located in the west London inner-city district of Chelsea. Originally built as a dissenting chapel, it was opened in 1870 as the New Chelsea Theatre, then became the Belgravia Theatre. It was reconstructed as the Royal Court Theatre in 1871 and staged premieres of Pinero’s "The Magistrate", "The Schoolmistress" and "Dandy Dick". It was closed and demolished in 1887.

The Court Theatre was built on the site and was designed by theatre architects Walter Emden and Bertie Crewe, but Crewe pulled out of the project before completion. The exterior is in stone and red brick in an Italian Renaissance style. Originally there were three circles in the auditorium that were supported by pillars. It was decorated in an Empire style.

It was opened in Autumn 1888. Although located away from the main concentration of London’s West End theatre district, the Court Theatre occassionally staged a new play, particulary in the early-1900’s when George Bernard Shaw’s "Major Barbara" and "The Doctor’s Dilemma" had their premieres here.

The Royal Court Theatre was converted into a cinema in 1934, and it continued in this use until 1940, when it was closed due to damage by German bombs. It remained closed until 1952, when renovations were carried out, by noted cinema architect Robert Cromie. The upper circle (Gallery) was converted into offices and the rehearsal room at the top of the building became the theatre restaurant.

It became the home to the English Stage Company in 1956, and after a refurbishment in the 1960’s, became famous for its productions of ‘earthy’ British dramas by play writers such as Harold Pinter and John Osborne with “Look Back in Anger” and “The Entertainer” starring Laurence Olivier being most notable.

In 1971, the restaurant area was converted into a second acting space known as the Theatre Upstairs. On 16th June 1973, the world premiere production of Richard O'Brien’s “Rocky Horror Show” starring Tim Curry was first performed in the Theatre Upstairs. It was soon transfered to the old Classic Cinema on nearby King’s Road, where it built up such a cult following, it transfered to the larger King’s Road Theatre (currently in 2013 the Cineworld Chelsea) eventually transfering to London’s West End at the Comedy Theatre.

The Royal Court Theatre was radically redesigned internally in 2000, by architect Haworth Tompkins. It is designated a Grade II Listed building.