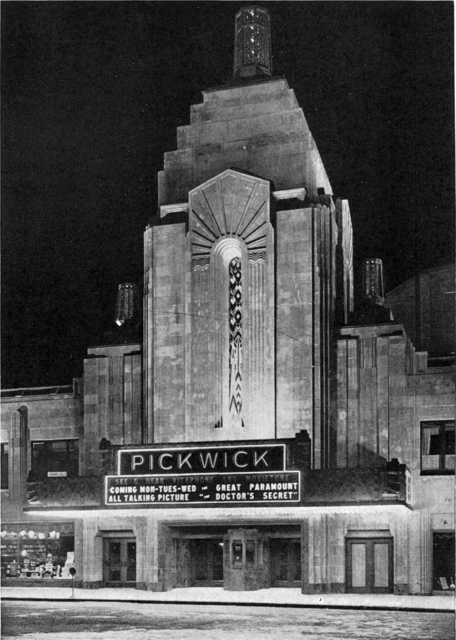 Designed by the firm of Zook & McCaughey, the 1,500-seat, Pickwick Theatre began life in 1928 as a vaudeville and movie house.

In 1975, the theatre was named to the National Register of Historic Places, insuring its preservation as a cinema treasure. But it did not reach true acclaim until the theatre’s facade was used as the backdrop for the opening sequence of Siskel and Ebert’s “At the Movies” in the 1980’s.

In 1990, three smaller screens were added to the rear of the Pickwick Theatre, enhancing the theatre’s commercial prospects without endangering the original auditorium.

During 2007, the Bog Theatre company, which was formerly housed in the Masonic Temple building in downtown Des Plaines, presented live theatrical productions at the Pickwick Theatre. The Pickwick Theatre also hosts other occasional live entertainment and special events.

In 2012, the marquee was repainted in black & white, with some red, to return it to its original colors. Further renovations were completed in October 2012 which returned the original auditorium it to its Art Deco style splendour. The main auditorium now has a reduced capacity of 1,000, with wider new seats. Seating capacities in the three smaller additional auditoriums are now 160, 96 and 220. In 2017 a fifth screen was added.

Added a picture of the original seats. Yes I believe they were replaced in 1948.

Here is a 1949 picture featuring the original teaser curtain.

To: BROAN, where do I find the photo of the seats?

Is that a blimp mooring on top of the building? It sure looks like one.

In a Facebook thread about the same article, it was noted that 6 other Illinois theatres already have laser projection.

My favorite place to see a film. Matt’s classic film series once a month is a must for movie lovers. His comments about the movie are a must and adds to the knowledge of the movie. Jay Warren’s prelude on the pipe organ before the film is a wonderful touch!!! Bravo Pickwick!!

the marquee pictured in the linked article looks beautiful!

News piece of the Pickwick coping with the current circumstances.