Pickwick Theatre In Center of Struggle 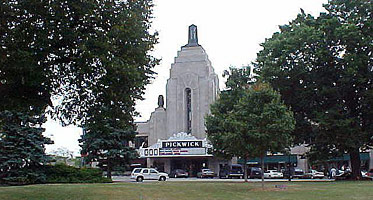 PARK RIDGE, IL – The landmark 76 year-old Pickwick Theatre in Park Ridge, which is a symbol of this Chicago suburb, is finding itself in the midst of a struggle between the City of Park Ridge, its owners, the Vlahakis family, and the Pickwick Theatre Council, according to the Mount Prospect Journal.

The Art Deco-style former vaudeville house (and one of the largest movie palaces in the Chicago suburbs) needs extensive repairs and renovations according to Pickwick Theatre Council president Catherine Kenney.

City officials want to inspect the theater to verify its needs for upgrades and repairs, but cannot legally enter the building without the owner’s approval. The relationship between all three parties has been called “adversarial” by city council members.

Kenney agrees “We are adversaries. The owners promised us they would donate the theater as a tax credit, but since then they have rescinded that. They regard the Pickwick as a piece of real estate. We regard it as a valuable historical landmark that needs a lot of repair and upgrade, and is a marvelous place for live theatre events.”

The Vlahakis family in a letter to the Mayor of Park Ridge, Michael S. Marous, stated the theater isn’t for sale, and is more successful than ever and have put more than $500,000 into maintenance and repairs over the years. Kenney disagrees, “A theatre offering discount priced movies is a dinousaur. It needs to diversify.”

What is the source of this story? It does not appear to be from a news agency. Please clarify and cite your sources in the future.

Personally, I do not see what value these comments have without comment from the owners. Overall, the Pickwick appears to operating quite well. It is strange to me to hear people complaining about “discount priced movies” in a historic theatre! What, precisely, is the alleged struggle?

Let’s all try to present each side of the story (if there truly is one). Owners of such private property are the key sources of information, the holders of the keys and the keepers of “cinema treasures.”

Well-intentioned individuals or groups with or without a vested interested (and/or expertise) may have grand ideas for any given theatre. However, why take issue and “poke the bear” of an apparently successful, open, operating theatre?

The story originated in the Mount Prospect Journal, as cited in the first paragraph of this article.

As with the rest of the stories we publish on Cinema Treasures, you may view the original article in its entirety by clicking on the link that appears in the attribution.

If you feel this story is one-sided, we recommend you contact Mount Prospect Journal directly.

Sorry to miss that. I guess I am used to seeing a link to the news source/article at the bottom or somesuch.

And, yes, the story does seem vague, one-sided and rather pointless. I will pen a note to Mount Prospect Journal. You do see where I am coming from?

Speaking from personal experience, I have found the owners to be: a) open to theatre and organ enthusiast events, b) open to public tours, c) cooperative with journalists, d) decent landlords, and e) enduring operators in times when the community would rather have had a mall or housing in its place.

The aforementioned adversaries might do well to learn how to become advocates and boosters until such time they own the building and have operated it profitably for a couple decades before they speak out of turn.

Why is Park Ridge trying to tell a private enterprise how to run its business? But then, Park Ridge has a history of infringing on personal property rights. It’s a very facist government there. The city’s mentality is that it owns your house or business. They even have an “Appearance Commission.” How enlightened they are.

In the words of Paul Harvey, the REST of the story is what I should have read before commenting.

In its 76th year, the Pickwick Theater has come to this:

A divided city council voted 9-5 Monday night (Apr. 5) to donate $10,000 in city funds to the council, but it is unclear if the funding will have any kind of positive impact on the theatre’s preservation or future."

Complicating matters is that the city, which wants to inspect the theater to determine its physical condition and need for upgrades and repair, was advised by Attorney Everette Hill Monday night that it cannot legally enter the theatre property without the consent of owner Dino Vlahakis and his family.

A five-member Park Ridge Pickwick Theatre Property Committee was formed by aldermen Monday night to pursue the possibility of inspecting the theatre and possibly developing some cost estimates for renovation work. It includes Ald. Donald Crampton as chairman along with Ald. Mark Anderson and Mayor Michael S. MaRous. Plus Thomas Brady, a local architect who reportedly has historical preservation credentials, and Aurora Bella-Autriaco, a new member of the city’s Appearance Commission, which deals with the architecture and appearance of all structures in the community.

Voting against the $10,000 donation Monday night were Ald. Howard Frimark, Andrea Bateman, Sue Beaumont, Larry Friel, and Rich DiPietro. Most of them said they did so not out of any criticism of the Theatre Council or lack of funds, but because of the “adversarial relationship” between the Theatre group and the owners.

Shedding some light on that relationship Tuesday for the Journal was Catherine Kenney, Pickwick Theatre Council president.

“Yes, we are adversaries,” she said. “The owners regard the Pickwick as a piece of real estate. We regard it as a valuable historical landmark that needs a lot of repair and upgrade, and as a marvelous place for live theatre events.

“In 1999,” she went on, “the owners promised us they would donate the theater to us as a tax credit. Since then, they have rescinded that, and they have found out that the theatre isn’t worth as much as they thought it was.”

“We would like not only to raise funds for the theater’s preservation, but we would like to hold live events there, as we have in the past. But now that’s not possible. We are now holding events at the public library, like we did last week with the Ernie Pyle celebration, to promote the theatre from other venues.”

She said the owners have withdrawn from the council and its activities, and the council does not have access to the theatre itself for the purpose of planning activities.

“We just want to make sure the theatre is not torn down for redevelopment,” Kenney said. “The city wants that also.”

“A theatre offering discount prices on first-run movies, it is a dinosaur,” Kenney said. “It needs to diversify. It needs to be upgraded and renovated.”

Disputing this in a letter to Mayor MaRous on Mar. 30 were the Vlahakis and Loomos families, owners.

“The Pickwick building and Theatre are not for sale,” they said. “We are currently running a very successful business and envision many successful years to come. Last year, over 200,000 people attended movies and special events here. In the 23 years we’ve owned and operated the theatre, the last three have been our best movie years ever (thanks to movies like ‘My Big Fat Greek Wedding’‘).

They went on to say that the Pickwick building, which houses retail shops and offices surrounding its movie house, experiences one of the highest occupancy rates in the area. “As the Uptown redevelopment project progresses, the Pickwick Theatre will be a major anchor, as it has been for the last 75 years.”

The letter adds that the families have put more than $500,000 into maintenance and repairs in recent years. “We feel a feasibility study of the building is an unnecessary expense for the taxpayers and the City of Park Ridge.”

The city is especially interested in its future because of the Uptown redevelopment that is planned to take place across Prospect Avenue from the theatre beginning later this year.

It looked to me last summer when I attended a G-FEST related screening that work was being done on the theater. This is a fine theater and if properly restored, will be even greater! I am looking forward to going to the Pickwick this July during G-FEST XI!

LEAVE THEM ALONE. WHY DOES EVERYONE WANT TO BUILD COOKIE CUTTER BUILDINGS EVERYWHERE ? LET THESE THEATRES WITH CHARACTER BREATHE !

The the next occasion I read a blog, Hopefully so it doesnt disappoint me about this. I am talking about, Yes, it was my choice to read, but I really thought youd have some thing intriguing to express. All I hear is actually a lot of whining about something you could fix if you ever werent too busy in search of attention. Steel stud contractors

The the next occasion I read a blog, Hopefully so it doesnt disappoint me about this. I am talking about, Yes, it was my choice to read, but I really thought youd have some thing intriguing to express. All I hear is actually a lot of whining about something you could fix if you ever werent too busy in search of attention. Steel stud contractors