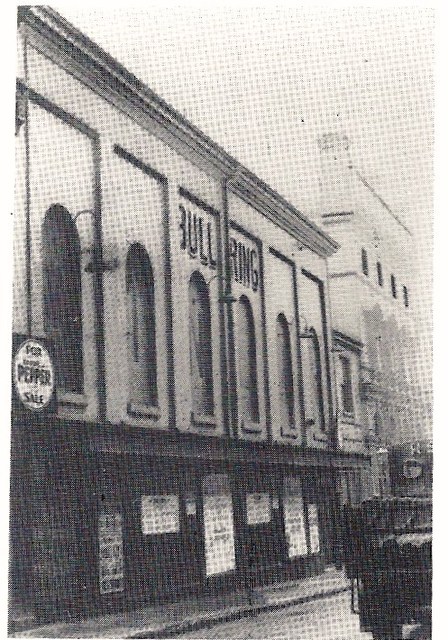 Located on Park Street close to the corner with Digbeth. An example of an early music hall attached to a pub (the Royal George Tavern) the London Museum Concert Hall opened in 1863. It underwent many changes of name, but is often referred to as Coutts Music Hall, a name it held from 1897 until July 1912 when it closed and was internally rebuilt to re-open as the Bull Ring Cinema.

It never had sound installed and closed as a cinema in December 1931. Throughout it’s life, theatre and cinema it was a known ‘rough’ house, with the nickname of ‘The Mucker’. In 1890 one stage manager was murdered in the hall!

Externally it is a plain building with six double doors on the ground floor arranged 1-1-2-2, entry was via the single pair on the left side of the facade. Above this at 1st and 2nd floor level are six blind arches, the height suggesting that originally there may have been two shallow balconies.

The interior was swept away when it was converted to a cinema in 1912, and again after films ceased in the early-1930’s, when the former auditorium was sub-divided to form a sports club and a restaurant. The club later became a pub and after that a nightclub and karate centre.

In October 2009 the building is empty, with demolition and site redevelopment imminent.

Two photos of the former Bull Ring Cinema, taken in October 2009, shortly before the scheduled demolition of the building:–

I am not sure, but I think the building is still there – the redevelopment delayed.

The Bull Ring Cinema was last operated by “The Lyons Estate.. along with the Globe and 50% of the Maypole Cinema