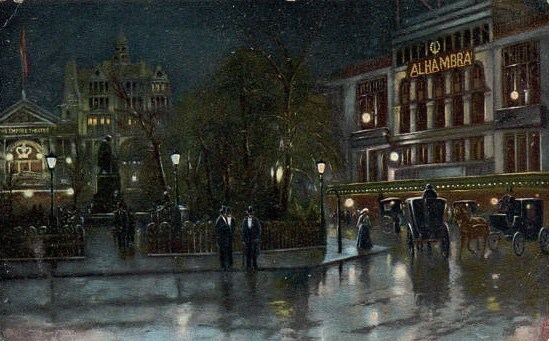 Originally on this site on the eastern side of Leicester Square was the Panoptican of Science and Art, which opened on 18th March 1854. Designed in a Moorish style by architects Finden & Lewis as an exhibition hall, it had a capacity for 5,000. In 1858 it became the Great American Circus with a seating capacity for 2,208. In 1869, major alterations were carried out adding a stage so it could be used as a music hall, known as the Royal Alhambra Palace. The capacity was given as 3,500, including standing space. The building was destroyed by a fire on 7th December 1882.

Retaining the original facade, a new building was erected to the plans of architects John Perry and Frederick Reed, which opened on 3rd December 1883 as the Alhambra Theatre Royal, with “The Golden Ring” a fairy spectacular opera. Again built and decorated in a Moorish style, it became a popular music hall from 18th Ocober 1884. Redecorated to the plans of architect E. Clark in April 1888, it was renamed Alhambra Theatre in 1890. In September 1892 E. Clark & Pollard were employed to extend the circle by the removal of some side boxes, giving a total seating of 1,438. There were 588 seats in the orchestra stalls, 166 in the grand circle, 226 in the balcony, 160 in the amphitheatre and 298 in the gallery. There was standing room for 838. In 1897, a new extension and ‘Grand Entrance’ at the rear of the theatre backing onto Charing Cross Road was added, to the plans of architect W.M. Brutton.

Films were included as part of the variety programme from 26 March 1896. They were filmed on the roof of the theatre by Robert Paul. The theatre was taken over by Oswald Stoll in 1916 and Revues became popular. In 1919, Serge Diaghilev began a season of Russian ballets, and returned several times to the theatre. The silent feature film "Broken Blossoms" starring Lilian Gish opened in 1920. Other films to be screened here were Mary Alden in "The Old Nest" which opened in September 1921 and "The Cabinet of Dr. Caligari" with Conrad Veidt. From 1922, the Leicester Square entrance was closed and the entrance at 23 Charing Cross Road became the main entrance to the theatre. In 1923 the stage revue “Mr. Tower of London” starring Gracie Fields played at the Alhambra Theatre

It was taken over by British International Pictures from 6th October 1929, and was equipped for sound films from December 1929 opening with Lew Ayers in “All Quiet on the Western Front”. The Alhambra Theatre sometimes played concurrent with the Regal Marble Arch (then also operated by British International Pictures). The Alhambra Theatre screened films until April 1934, when it reverted back to live performances on its stage, mainly ballet.

It was purchased by Oscar Deutsch of the Odeon Theatres Ltd. chain and closed as a variety theatre on 1st September 1936 with Dante, the Danish magician in his ‘Great Magical Spectacle’ “Sim-Sala Bim”. The building had one further use on 8th October 1936, when film crews moved into the building and it was used as a theatre location shoot for "Men Are Not Gods", a United Artists film starring Miriam Hopkins. During the film’s “Othello” sequences, the theatre auditorium can be seen with a full house (of dressed extras).

The Alhambra Theatre was demolished in November 1936, and the mighty 2,116-seat flagship cinema of the Odeon chain, the Odeon Leicester Square, was built on the site, opening on 2nd November 1937 with Ronald Colman in "The Prisoner of Zenda". An office block named Alhambra House was built at the rear on the Charing Cross Road part of the site, which had contained the ‘Grand Entrance’ extension of the Alhambra Theatre.

Many historic photographs, memorabilia and some more history here:
http://www.arthurlloyd.co.uk/Alhambra.htm

It always interests me when a theater has an entrance in the rear like the Alhambra. One wonders how patrons gained entrance to the front of the house. According to the information above, the original entrance on Leicester Square was even closed up and the rear entrance on Charing Cross Road became the only entrance. The La Fenice Opera House in Venice has a rear entrance, under the rear stage wall. From it lead two corridors, one on each side of the building. They pass under the wings of the stage and then alongside the auditorium and into the front foyer. Perhaps there was a similiar arrangement at the Alhambra.