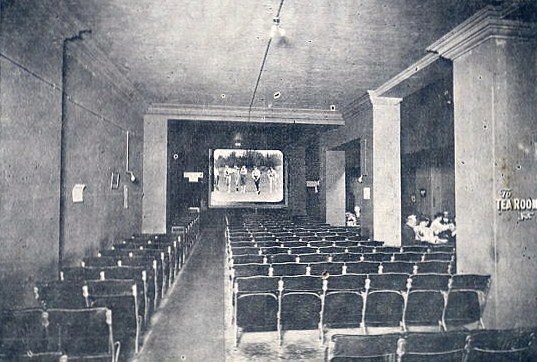 Located next to what is today the Odeon Leicester Square Screens 2-5 (former Studios Cinema/Odeon Mezzanine Cinema), Leicester Square in the heart of London’s West End theatre district. This building originally was occupied by the Cranbourne Club and part of it at ground floor level was converted into a 198 seat cinema (with standing room for 42)when it opened on 5th June 1909 as the Circle in the Square. The architect for the scheme was credited to J.P. Crosby. In the basement was a tea-room that seated 300.

It was the first full time cinema to open in Leicester Square and at that time it was located next to the Alhambra Theatre (later demolished for the Odeon). In 1914 it was renamed Cupid’s Cinema and remained so until 1922 when it was re-named Leicester Square Cinema. In 1926 it was renamed Palm Court Cinema. It closed in around 1928 due to competition from other cinemas that were opening in the locality.

The building underwent several changes of use over the years becoming a restaurant, and an exclusive club called the 400 Club. In the 1970’s it became an up-market gay club called Adam’s, which in turn became a sleazy sex, bump and grind gay disco named Subway which was eventually closed down by Westminster Council. It then became the famous Comedy Store for several years. It then became an Angus Steakhouse restaurant.

From 3rd June 1992, the cinema part of the building has become a pub in the Weatherspoon’s chain called ‘Moon under Water’, while the former basement tea room became a nightclub called ‘Storm’ and ‘Club Koo’.

The 400 never became “the notorious Gargoyle Club” as claimed, before or after the 70s and 80s when 28 Leics Sq assumed a series of identities. The legendary Gargoyle of David Tennant (which had a small theatre of its own) was always at 69 Dean Street in Soho since its creation there in Jan 1925.