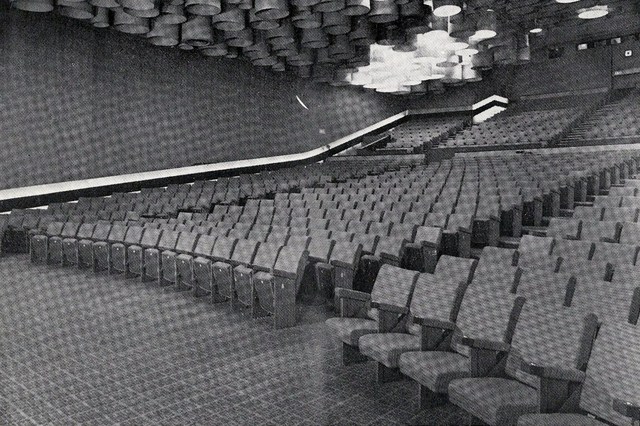 Originally on this site was a playhouse theatre, Daly’s Theatre, which was opened on 27th June 1893 and designed by architect Spencer Chadwick. It was closed on 25th September 1937, and was purchased by Warner Bros. to be demolished. Warner’s built the new 1,789-seat Warner Theatre on the site which opened on 12th October 1938 with Errol Flynn in “The Adventures of Robin Hood”.

The Vue West End closed for a refurbishment on 9th March 2017 to the plans of UNICK Architects, which includes the installation of 1,385 VIP and luxurious recliner seats thoughout all the screens, and Dolby Atmos sound in some auditoriums. It re-opened 11th July 2017.

It has an excellent location on Cranborne Street on the corner of Leicester Square and occasional premieres are held here.

Lionel: “The Jungle Book” re-release (IIRC in 1986?) was actually one of the first films I ever saw in a cinema, alas in a poor quality local cinema.

Not familiar with the JBL 8325. Have you any more information?

For the UK, the re-release was in the summer of 1987. It was also one of the first films I saw in a theatre, although in my case, it was a re-release in the mid-seventies. I’ve never been a huge Disney fan though, even as a child. The JBL 8325 surround speaker was a 3-way system similar to the 8330 although the shape was parallelepipedic. In the Warner cinema here, there were eight of them on each side wall and two on the rear wall (only two, due to the architecture limiting the auditorium width at the back). I also heard them in another cinema and they were good, no audible difference with the 8330. You can find its specs here, and plenty of pictures in Google :

Thanks Lionel; for some reason my own Google search on the 8325 yielded no results. Very similar indeed, just a neater and easier to install form with the 8330.

I could have sworn it was ‘86. Somewhere I have an old notebook in which I kept logs of cinema/theatre trips from my childhood…

Are there any pictures of the interior when it was Warner’s premiere house in London in the 60s? I only see the one of the band right at the lip of the proscenium but nothing of the auditorium itself. Above picture looks like after the twinning in ‘70.

Two views of the original 1938 auditorium of the Warner Theatre now in the photos section.

Thank you. I assume that was the lay out of the auditorium until ‘70? I wonder if the proscenium was widened for 70mm or if it was projected within it for films like MFL and Camelot. I just noticed the ad for The Devils. This and Song of the South are the only 2 films I know of as banned.

These two pictures show the original auditorium before it was redecorated and fitted out with a new stage and a 70mm screen for a few years, before it was twinned. There is a small picture showing the screen with curtains open, in the book “West End Cinemas” by Allen Eyles. I can’t scan it and post it here because I don’t have the book right here and the picture may not be free of use. This is the only picture I know of the Warner with this remodelling.

Does this cinema even have THX anymore?… Oh just read lost its THX oh well no point ever going to this place if it doesn’t have serious THX sound system.

@vindanpar : I just uploaded a picture which should answer your question. Transformation for 70mm in 1964, but still as a single-screen theatre.