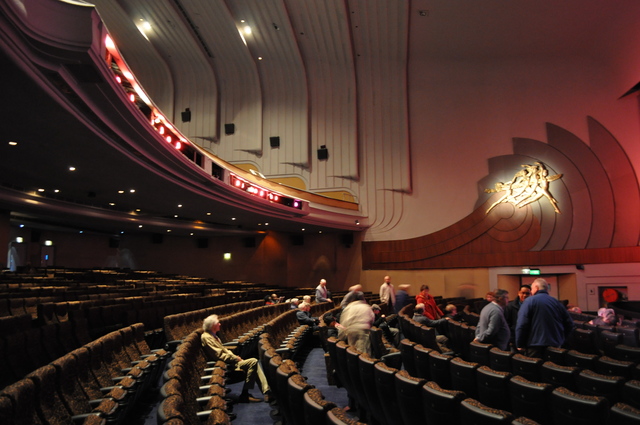 The Odeon Leicester Square was the ‘flagship’ cinema of Oscar Deutsch’s chain of Odeon Theatres Ltd. It was built on the site of the Alhambra Theatre (1883-1936) (which has its own page on Cinema Treasures). Designed by architects Harry Weedon and Andrew Mather, the Odeon opened for business on 2nd November 1937 with “The Prisoner of Zenda” starring Ronald Colman. The seating capacity at opening was for 2,116 (1,140 in the stalls and 976 in the balcony) and the seats were covered in mock leopard-skin!

It dominates Leicester Square with its 120 feet tall tower, and the entire façade and tower covered in black granite slabs.

Over the years there have been many alterations to the interior of the cinema, including an ill-fated £200,000 ‘zing’ treatment in 1967 which removed practically the entire original decorations. Only the elaborately painted safety curtain remains original today (and that is rarely seen or used). The last film to play in the original auditorium was Audrey Hepburn in “Two for the Road” on 20th September 1967. It re-opened with a gala premiere of “Smashing Time” with Rita Tushingham & Lynn Redgrave on 27th December 1967 with a stage show featuring Cliff Richard & the Shadows.

The projection equipment includes a Cinemecannica Victoria 8 (two projectors plus a standby machine, with large capacity spools, and in addition a platter for running 70mm as and when necessary). It is also equipped to play digital presentations, VHS, DVD and 16mm.

All digital sound formats are supported, including 8 channel SDDS. Full stage facilities are available, as the screen and stage speakers are designed to retract. There is the aforementioned safety curtain, a set of house curtains and a set of screen curtains. The stage has had occasional use over the years, one occasion being during World War II when Bob Hope, Adolphe Menjou and the Glenn Miller Orchestra took to the stage, and entertained an audience which included Winston Churchill and General Eisenhower.

The Odeon also contains its original Compton 5Manual/17Rank organ, with illuminated console on a lift, Melotone, and a Grand Piano which was opened by organist James Bell. It is still played on special events, accompanying silent films and occasionally during premiere presentations.

On 20th April 1990, five additional screens were added to the Odeon, built at an alleyway running between Leicester Square and Charing Cross Road and named the Odeon Mezzanine and have their own separate page on Cinema Treasures (now known as Odeon Studios Leicester Square).

In April 1998, the building was renovated and copies of the ‘Flying Ladies’ sculptures were re-instated on the side-walls and some of the concealed lighting in troughs in the ceiling were re-lit.

Always a first run cinema, initially the films played were mainly United Artist productions. Later it premiered many films from the Rank Organisation, who took over Odeon Theatres in 1941 on the death of Oscar Deutsch. From 1946 and for many years, it alternated each year with the Empire Theatre across Leicester Square to host the Royal Film Performance. The Empire Theatre was dropped from this honour after it was modernised in 1961. The Royal Film Performance is an Annual event, unique to the United Kingdom. The film industry invites the reigning monarch or a leading member/members of Royalty to attend a performance of an unseen film, the attending audience pay big money to participate in the event, the money made goes to charity. Many film stars and personalities also attend this glittering event.

There are many, many, more and of course in more recent years the Odeon Leicester Square has become ‘the’ place for premieres, which seem to happen weekly!

The final regular film show was on 8th January, 2018 with “Star Wars:The Last Jedi”. On 9th January 2018 the European Premiere of “The Post” was attended by Tom Hanks, Meryl Streep and Steven Spielberg. After which the Odeon was closed to be renovated & remodelled.

The rear stalls seating area has been taken over by new toilets, a switch room and larger concession area. The former front stalls is now 259 recliner seats on nine rows. The front of the circle (Royal Circle) now has three rows of 90 recliner seats. The rear circle has 446 regular seats on fourteen rows. Total seating capacity has been reduced to 794 + 6 disabled spaces (reduced from 1,683 seats of recent years). The Odeon London Leicester Square was re-opened on 21st December 2018 as a Dolby Cinema with Emily Blunt in “Mary Poppins Returns”. The pre-film organ interlude had the refurbished Compton organ played by organist Donald MacKenzie. The World Premiere of “Alita-Battle Angel” starring Rosa Salazar & Christolph Waltz was held here on 31st January 2019.

The adjacent Odeon Mezzanine screens have been renamed Screens 2 - 5 Odeon Leicester Square(they have their own page on Cinema Treasures). It also re-opened on 21st December 2018 and have a reduced seating capacity of 116 in four screens.

The International Premiere of the Netflix film “The Irishman” was held on 13th October 2019, closing the 2019 BFI London Film Festival. The stars and director of the film attended.

@CF100 - Glad to hear that your ankle is alright. COVID safety rules indeed complicate everything. A pity especially for those who got the jab twice. I hoped that, this year, the pandemic would be over and we would be able to travel normally again, and I could have seen Kenneth Branagh’s Death on the Nile in 70mm or 4K at the OLS (or the new James Bond episode).

Lionel: Haven’t kept up to speed on the COVID rules regarding entry to the UK, so not sure if there are any real hoops for you to jump through?

I happened to pass through Leicester Square earlier this week, and whilst it was good to see custom Odeon typeface “007” signage on the OLS, the surrounding environs do look somewhat forlorn from the impact of COVID on visitation.

Hopefully things will be closer to normal soon so you are able to visit… I gather that the OLS is even closing tabs at the end of Bond screenings!

In addition to the cross-sectional 3D reconstruction, many 360° photos throughout the publicly-accessible areas can be seen.

Fred Fullerton (former Chief Projectionist at the Empire Leicester Square) has recently uploaded many videos on YouTube, some of which are particularly special.

The above-linked video was taken just before the 1997 refurbishment. Two sets of tabs opening and lowering of the safety curtain can be seen, as well as “The Duchess” Compton organ emerging from the stage.

I had forgotten that the screen used to be positioned so low and at such a steep angle.

I can’t say that I have ever heard of “flo neon,” although I did wonder how that effect was achieved. These days, addressable LED strips could do similar (and more!)

I remember this interesting feature well, however. By the time this video was shot, it looked somewhat dated, partially because it didn’t appear to be under digital control, going by the not-quite-perfect timing. Also, not infrequently, sections would be in need of replacement.

I also found that, whilst I liked it, it gave me an oddly unsettling feeling, rather than being relaxing before the programme… although I’m really not sure why…

At the start of the second video, the “Thieves are Silent” snipe featuring an animated snake can also be seen. Back then, this was also often shown in the old Empire 1.

It is very unfortunate that FanaticalAboutOdeon is no longer with us. He would surely have been delighted to see this footage of those old tabs.

Speaking for myself, however, I am very grateful that these videos have been shared.

Best wishes for Christmas and the New Year to all. Fingers crossed that cinemas will continue to operate at a reasonable level of normalcy!

I’m a latecomer for Christmas but I wish you all fellow Cinema Treasurers the best for the coming year. I hope all of you are safe, vaxxed or not.

Because of the huge seating capacity of the auditorium, when I visit London, from Philadelphia, I’ve always been more awestruck by this movie theater than any other in London. Last month, after a Pandemic pause for visiting London, I was finally able to see a movie in the redone auditorium. I had seen “Top Gun: Maverick” at the Empire Haymarket, but the movie is worthwhile enough to see a 2nd time, so I saw it in Dolby Vision & Atmos here. Unfortunately, the curtain was not used before or after the film. I posted photos of the exterior, the auditorium, and a closeup of the Circle doors with movie titles that premiered here. I loved that the doors listed the titles. The main stairs to the Circle has screens with images from the history of this theater, another nice touch. Even though the auditorium no longer has the huge seating capacity, the Circle (balcony) still has enough seats to keep me awestruck. Movie theaters should not be only boutique. We should be able to enjoy a movie with a crowd!

Thank you Howard for posting the pictures of the London cinemas you visited last month. No curtain used at the OLS? What an amateurish performance…

HowardBHaas: Those are some nice photos!

It looks like there screen was just left blank? Very poor, and it looks ridiculous in that auditorium.

I know what you mean about what looks like a veritable never-ending “sea” of seats. Interestingly, the Upper Circle of the OLS actually gained a couple of rows, with the circle’s layout revised (no full width cross gangway/new central wide vomitorium,) and the last row is now up against the rear wall.