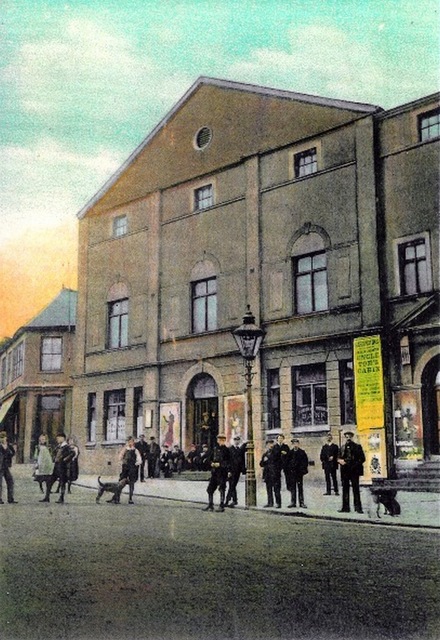 Located in Treharris, Mid-Glamorgan (near to Merthyr Tydfil). Treharris Workmen’s Hall was built in 1894 and opened in 1895. The funding of the building being paid by subscriptions from the miners employed at the nearby Deep Navigation and Ocean Collieries.

The building was a typical Workmens' Hall design with two shops at its base, either side of the entrance and facing the square. It was being used as a cinema by 1910 and by 1914 was part of the Albany Ward Circuit. In 1920 one shop unit was a grocery store and the other housed a branch of Barclays Bank. Albany Ward Circuit were taken over by Provincial Cinematograph Theatres(PCT) who were taken over by Gaumont British Theatres in February 1929. In 1930 it was taken over by an independent operator and was enlarged and re-opened in October 1930.

By 1937 it was the Palace Theatre, and had a 28 feet wide proscenium and a 20 feet deep stage. There were three dressing rooms. At that time the Palace Theatre was equipped with a Klang-Tobis sound sytem. By 1954, an RCA sound system had been fitted.

By 1963, CinemaScope had been installed, with a screen within the original 28 feet wide proscenium. There were now four dressing rooms. The Palace Cinema was closed in 1971. The building was still standing unused in 1995.

The building was demolished in January/February 2000 and had been purchased by a housing association to build houses on the site. In 2018 the site was in use as a car parking lot.

The demolition of the Palace Cinema commenced on the 25th of January 2000. The site has been acquired by the Merthyr Tydfil Housing Association who are proposing to construct flats on the site.