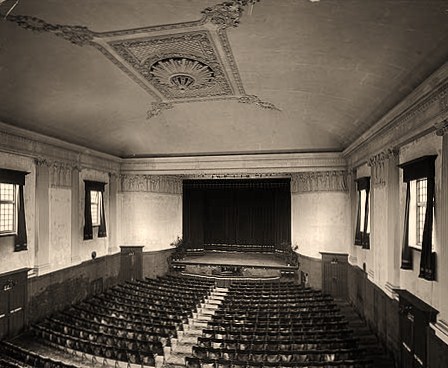 Located in the southeast London district of Lewisham. The Kings’s Hall opened on 26th December 1912, and was located close to the Obelisk Cinema, which had opened in May of 1912. The King’s Hall was purpose built as a cinema and was designed by architect Percy Leeds, with seating provided for 748 in the stalls and 175 in the circle. The auditorium had a barrel-shaped ceiling and a ‘handsome’ frieze of allegorical figures around the walls.

The King’s Hall suffered German bomb damage, first on 7th September 1940, which closed the cinema until repairs were carried out, and it re-opened on 16th August 1943. It was bomb damaged again on 3rd July 1944, and this closed the building for much longer, due to building restrictions.

Repairs and renovations were carried out by architect Robert Cromie, and it re-opened as the Rex Cinema on 24th July 1950, being the first cinema in London to be re-constructed after war damage. The main exterior walls were retained, but the elaborate facade was given a new ‘modern’ look, and the interior was totally renewed.

The Rex Cinema was closed on 6th May 1967 and converted into a bingo club. Taken over by the Star Cinemas chain of Leeds, it re-opened as a twin cinema, Studios 6 & 7 on 26th December 1969 with Warren Mitchell in "Till Death Us Do Part" and Beryl Reid in "The Killing of Sister George". Seating was provided for 515 in Studio 6, and 372 in Studio 7.

It was re-named Cannon, when the Cannon Group took over Star Ciinemas in December 1985, and they closed the cinema in April 1986. It was demolished in May 1988.

A set of vintage photographs of the King’s Hall/Studios 6 & 7:
View link

By the late-1970’s, the Star Cinema circuit had re-named nearly all their existing cinemas Studio with a number. But the numbering is not rational. In London there was the Studios 1-4, Oxford Street, Studios 5-8, Bruce Grove, Tottenham, and in Lewisham, Studios 6 & 7. There never was a Studios 1-5 in Lewisham, or anywhere in the area.

Thanks, Ken! Reminds me of New York where Cinema 3, a single screen inside the Plaza Hotel, was blocks away from Cinema I & II and it got even stranger when separate companies operated the two locations. The matter was further complicated by the Plaza Theatre located between the two, making it a scavenger hunt for tourists trying to find their movie.

Ken Roe,Noticed what looked like ratings “Commando” had like 18 or something,did not have R rating. I notice PG on the other movie.

I believe Star’s first attempt at twinning was Studio 1&2 in Guildford – long demolished to make way for an open air bus garage.

Not quite sure why the name heading here is given as (somewhat confusingly) “Cannon Studios 6 & 7” as they were obviously two separate names. The Leeds-based Star Group had actually taken it over through one of its bingo operating companies in 1967, and (very briefly) operated it as a cinema before the switch to bingo. The opening of a Mecca club nearby (plus two other bingo clubs in the immediate locality) prompted Star to switch back to films, as Studio 6 & 7. It opened the same week that Star also launched two other revamped cinemas. The cinema became a Cannon for only its last few months of operation, though I recall that the flashing neon sign and Studio signage was not changed until early 1986. Confusingly, the throwaway weekly film guides displayed on the cover “Cannon 6 & 7”, though this didn’t appear in advertising which simply included “1” and “2” with the appropriate films advertised alongside. Cannon hinted at “structural defects” as the reason for its previously un-announced closure, though if this was the case declined to pass this information on to any prospective buyers when the place was offered for sale (as I rang up and got the details at the time – for interest only (as I couldn’t afford it!!)) and with the acquisition of the ABC chain (with its twin-screen cinema at Catford) for imminent completion, the company seem to have simply written it of as surplus to requirements. An NCP car park replaced it for a time before the site was redeveloped. One thing of interest that could also have been mentioned is the name “Kings Hall Mews” which obviously commemorates the original name of the cinema.

In “Girl on approval” (1962)James Maxwell and Annette Whiteley pay a visit to the Cannon when it was known as the Rex and was showing a double bill of “Watch it, sailor” (1961) and “Treasure of Monte Cristo” (1949). Shots of exterior, foyer and box office (including uniformed commissionaire and ticket prices). Also includes shots of cinema cafe. Exterior also appears later when the double bill has changed to “The absent-minded professor” (1961) and “The horsemasters” (1961).

Did an all night relief projectionist here when it was Studios 6&7 All horror bill and someone was stabbed in screen 6!