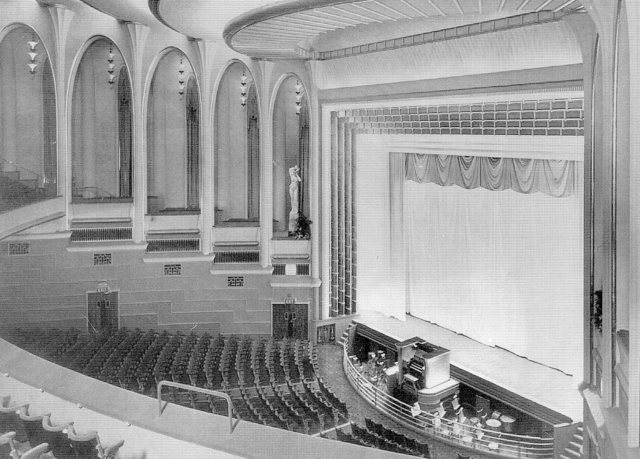 Located in the southeast London district of Lewisham, on a huge triangular site, with the entrance on Loampit Vale at Lee High Road, with other boundries on Molesworth Street and Rennell Street. The magnificent Gaumont Palace was opened on 12th December 1932 with Jessie Matthews in "The Midshipmaid" and Laurence Olivier in "Westward Passage" plus on stage Bobby Howells Big Band Show. Built for the Gaumont Super Cinemas chain (previously Hyams & Gale), it was the largest cinema designed by architect W.E. Trent, and he was assisted by James Morrison and Keith P. Roberts.

The facade had horizontal bands which originally contained letters advertising the weeks programme. There was a large central window, which allowed light into the 200 seat restaurant that was located in the circle foyer level. The name ‘Gaumont Palace’ was in large neon letters in a recess across the top of the building.

The foyer had polished macassar wood panelled walls and walnut wood around the display cases. There were decorative panels above the doors to the circle, possibly the work of artist Frank Barnes. The auditorium was pure Art Deco styled, with a stepped ceiling containing cove lighting. The side walls had a series of tall arches on each side, with the arch on each side of the proscenium having a large statue of a female nude sculptured by Newbury A. Trent. The proscenium was 56 feet wide, the stage 85 feet wide and 36 feet deep, and it was fully equipped for stage shows. The Gaumont Palace was equipped with a Compton 3Manual/12Rank organ which was opened by Frederick Bayco.

Stage shows featuring top artistes were part of the programme through until the early-1940’s, when wartime conditions brought them to a halt. It had been re-named Gaumont Theatre in 1937. In fact the Gaumont Theatre was closed for several weeks in early-1941, and during this time it did recieve some minor bomb damage. It re-opened on 3rd March 1941 with Charlie Chaplin in "The Great Dictator". After World War II, live shows commenced again in the form of sparodic Sunday Concerts, starring artistes such as Martha Raye, Carmen Miranda and Victor Borge. In November 1952, "Robin Hood on Ice" was presented for a week.

On 26th February 1957, the restaurant re-opened as a Victor Sylvester Dance Studio, with the famed orchestra leader appearing in person with his orchestra.

On 27th February 1962, towards the end of a matinee performance of "The Guns of Navarone" a fire (which was thought to have been deliberately started by childen) set the cinema alight, and extensive damage was done to the rear stalls seating area, and the entire building was badly smoke damaged. A concert that was to have been staged by Ella Fitzgerald the following Sunday was hastily transfered to the Trocadero, Elephant & Castle.

After several months of restoration, the cinema re-opened as the Odeon on 29th July 1962, with a special screening of Doris Day in "That Touch of Mink" and a suprise screening of the main original opening film from 1932, "The Midshipmaid". Many more concerts were then staged at the Odeon, among the artistes appearing were Nat ‘King’ Cole, Johnny Cash, Sarah Vaughan & Count Basie and His Orchestra, Ted Heath and His Orchestra, Ray Charles, The Supremes, Chuck Berry, Cliff Richard and The Shadows, The Rolling Stones, Manfred Mann, and The Beatles (twice in 1963). Later to appear were The Who, Rod Stewart, David Essex and The Bay City Rollers.

Attendences at film performances were on the decline and it was increasingly difficult to fill even a few rows of seats in the huge cinema. The Rank Organisation applied three times for a bingo licence, but were turned down on each occasion. The final film programme was Leslie Neilson in "Prom Night" and George Hamilton in "Love at First Bite" on 14th February 1981.

The former restaurant had been in use as a bingo club, a nightclub named Paradise Garage, and then became Pool club. The Odeon was left empty for 10 years, and the entire building was demolished in June 1991, to allow for a road widening scheme. A fragment of the left hand side of the facade remained in situ on the Rennell Street side of the building for many years, but even this disappeared around 2011.

The Odeon, photographed in May 1971, playing the Rank release:
http://www.mawgrim.co.uk/cavalcade/lewisham.jpg
A set of vintage photographs:
View link

The fragment of the building which was left for some twenty years after demolition (mentioned in main write up) consisted of a vertical line of mosaic tiles. Sadly, this too has now been demolished so no sign of this wonderful cinema remains.

I worked for Mecca Leisure at the time it was taken over by Rank and this led to some interesting characters appearing on the scene. One bloke who was on the maintenance team who came down to the Lewisham club to sort out the air-conditioning system had also just done a quick check and had a brief look round the Odeon to make sure it was still all secure. There was some expectation the time that Rank/Mecca would close the smaller club and reopen the Odeon for bingo….quite aside from the objections from the council, prior to its takeover Mecca had been a major stumbling block for Rank in its attempts to secure planning permission for bingo at the Odeon, and would spend thousands on legal costs opposing the application every time Rank put one forward. Ultimately, Rank did get permission for the Odeon site, though Lewisham council had already sealed its fate by zoning the site as part of a road ‘improvement’ scheme and obviously Rank did not proceed with the only limited life span the building had left. A great pity and loss, of course, and the first cinema that I was ever taken to (there was also a quite nice Wimpy Bar with some peculiar wall decor next door)

Happy memories of working there as Assistant Manager, in 1969, with Manager Chris Mott. ‘Little Stevie Wonder’ appeared – as did Joe Cocker….whose posters called him ‘Cockle’. A magnificent building!

I remember seeing Ella Fitzgerald at the Lewisham theatre (Gaumont or Odeon?) around about 1961/2 but can find no mention of her performance anywhere other than one which says that it was moved to the Trocadero due to a fire. Did anyone else see her sing there?

I remember the fragment of the building for many years! and if you look at the 1st Flickr link from Ian in 2009 I remember Starship Enterprises (I think a Games Arcade) for many years as well.

Exterior of the then Gaumont Palace is visible in the background as Annette Whiteley wanders aimlessly along Lewisham High Street at night in “Girl on approval” (1962).