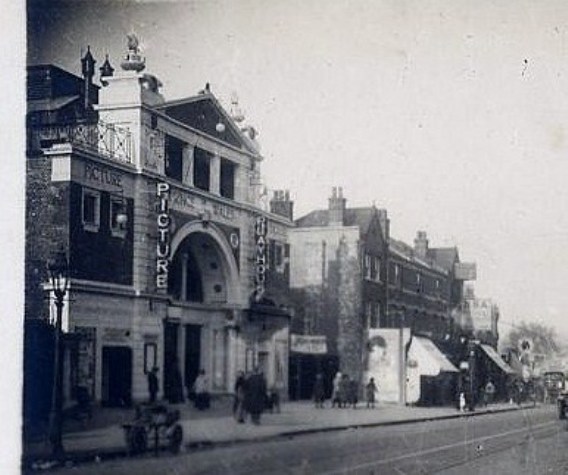 Located in the southeast London inner-city district of Lewisham. Built on the site of the Electric Palace, the Prince of Wales Picture Playhouse opened on 9th October 1922, and film star Mae Marsh attended. This was the 27th cinema to be designed by noted cinema architect John Stanley Beard. The rear wall and south flank wall of the old Electric Palace cinema were retained in the new building. The facade was in white glazed tiles, with relief colours of blue and gold, that were manufactured by the Hathern Station Brick and Terra Cotta Company, and had the name of the cinema in the tilework. There was a oak panelled foyer with further panelling inside the auditorium. There was a tea lounge on the first floor balcony foyer.

In the 1920’s, variety shows were presented as part of the programme, as there was a 10 feet deep stage and four dressing rooms. The Prince of Wales Picture Playhouse was featured in live radio broadcasts by the BBC which featured packed audiences in community sing-a-longs, acompanied by Frank Westfield’s orchestra. These were also recorded by a famous gramophone record company. The Prince of Wales Picture Playhouse was the first cinema in Lewisham to install ‘talking pictures’ on 10th June 1929, when Al Jolson in "The Singing Fool" was screened.

It was taken over by Associated British Cinemas(ABC) from July 1933, and re-named Prince of Wales Cinema in 1946. Closed on 13th June 1959 with William Hartnell in "Carry On Sergeant" and Gary Cooper in "The Westerner".

The building was demolished and shops were built on the site.