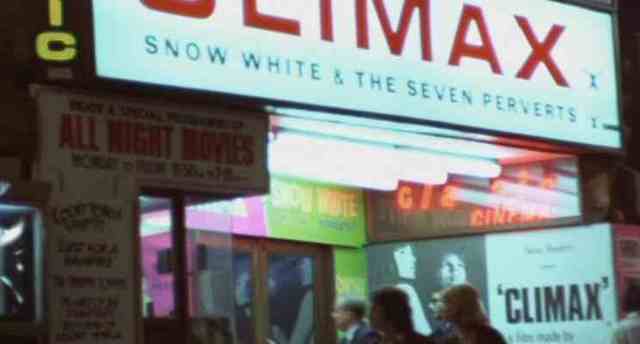 The famous Monico Building (which contained the Café Monico) on the northern corner of Piccadilly Circus and Shaftesbury Avenue was partially destroyed by German bombs during World War II. The space beneath the bright neon signs remained an empty bomb site until 1963.

A ‘temporary’ building known as the Circlorama Theatre was built in less than seven weeks and opened on 9th May 1963 with "Russian Roundabout". It was a completely circular cinema, which held 500 patrons, all standing-up to watch the 11 screens that surrounded them. Speakers were located behind the screens, in the ceiling and under the floor. Projection was via 11 Phillips FP20S 35mm projectors, which ran in sync.

Originally the entrance to the building was at the rear on Denman Street, but in the Autumn of 1963, it was moved to the more prominent Piccadilly Circus side. The film presented was a documentary, lasting 20 minutes, and playing at half-hourly intervals, 20 times a day. In 1964, the second film to play in the Circlorama process was "Circlorama Cavalcade". This played into 1965, and then the cinema was closed.

It was taken over by the Classic Cinemas chain and converted into a conventional single screen cinema, using just one of the projection port holes from its earlier use. The projection box area still circled the inside of building, but most of it was put to other uses, like storage for ice cream, confectionary and a managers office and staff rooms. The 270-seat auditorium was entirely curtained in a yellow coloured fabric.

The Classic Piccadilly Circus opened on 10th April 1966, with Shirley Temple in "Rebecca of Sunnybrook Farm", and it continued as a repertory cinema screening ‘Classic’ film revivals for several years. In the Summer of 1969, the Classic Cinema hit a gold-mine, when Peter Fonda in "Easy Rider" had its British premiere run here, playing non-stop 24/7, for nine months. After that it continued playing regular hours for many more months, with late-night screenings Sunday-Thursday at 11:00pm and extra late-night shows on Friday and Saturday evenings at 1:00am. After the long run of “Easy Rider”, the Classic played many recent releases, and also sexploitation films, and had late-night shows every night of the week.

The Classic Piccadilly Circus was closed on 24th October 1976, and was demolished.

A new permanent building was erected on the site, which contained a Wimpey Bar, later to become Burger King Restaurant. This too was very popular, but was closed in February 2008, and the building is now a branch of Barclays Bank.

Some more history and details on the Circlorama:
View link