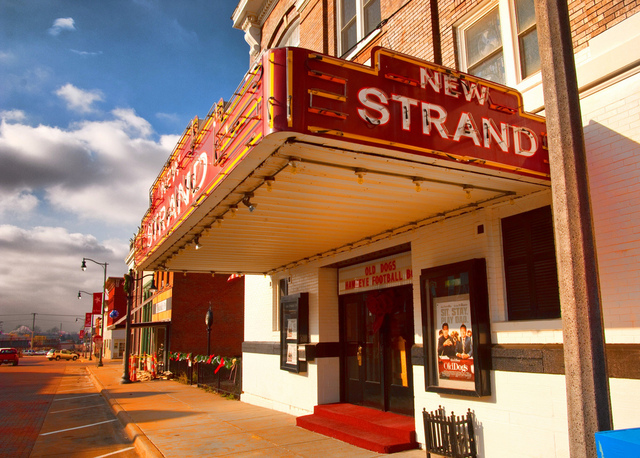 The West Liberty Opera House was opened in 1910. It was later renamed New Strand Theatre. It is adorned with wooden floors, a balcony, and well crafted plasterworks on its ceilings. The screen is 27'x12' and month-old movies run Friday-Monday for $3. Its restoration in 2001 was recognized by Iowa Governor Vilsack.

Given its 1910 opening, it seems likely that the New Strand is the opera house mentioned in various 1910 issues of The American Contractor. The item in the May 28 issue says:

Architects Charles Dieman and Ferdinand Fiske maintained offices in both Cedar Rapids, Iowa, and Lincoln, Nebraska, and their firm was among the busiest in the region during their late 19th and early 20th century partnership.

Full history below, including the original name it was built as: West Liberty OperaHouse

The New Strand’s origin as the West Liberty Opera House in 1910 means that it was indeed the project designed by Dieman & Fiske.

Joe Vogel, maybe you can find an address for a theatre in Sidney Iowa, possibly called “The Strand”. Apears to have been in operation in the 40s-60 possibly. I found a photo of it from a distance on that county’s Facebook page. If you find any info maybe add a page for it or I can.

Sidney, Iowa, is a very small town, and though I can’t find an address for the Strand Theatre (in fact I haven’t even found the name Strand mentioned) it would almost certainly have been located along one of the streets facing the town’s two-block-long public square. I did find mentions of a house called the Cozy Theatre operating at Sidney in the early 1920s, and there is a July 15, 1963 item in Boxoffice saying that “…the equipment from the theatre at Sidney, Iowa” had been sold, and the building “…remodeled into a ladies' ready-to-wear shop.” The house had last been operated by the city, Boxoffice said.

Thanks, that has to be it. The photo is across a park too. I’ll create a page for it and see what else shakes out.