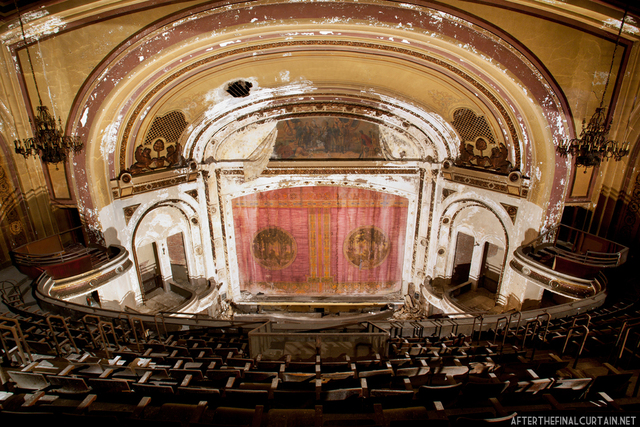 Proctor’s New Theatre, as it was originally called when it opened as a vaudeville theatre on November 23, 1914, was designed by architect Arland W. Johnson, and could seat 2,287 in its auditorium. The theatre itself was part of a five-story office building, with retail on the first floor. It was the largest of the Proctor’s Theatres built in the State of New York, and cost $325,000 to build.

Proctor’s Theatre has a gleaming terra cotta facade, in Neo-Gothic style, resembles a Medieval cathedral, with details such as gargoyles and masks of drama and comedy.

Though its interior was ornate, the Adamsesque style decor resembled more a late-19th Century opera house than the exotic and extravagant movie palaces of the 1920’s. Still, its towering proscenium arch was framed by gilded plasterwork, and imported crystal chandeliers hung in the lobby and over the auditorium. In the late-1920’s a projection booth was added to the top balcony. Later, the middle chandelier was removed to allow for better viewing of the movies.

In its use as a vaudeville house, many A-list Hollywood entertainers played Proctor’s Theatre in its golden age, from the 1920’s to the 1940’s, including Jack Benny, Jimmy Durante and Bob Hope.

However, by the 1960’s, it was simply another aging, decrepit movie house, playing double-features to mostly empty houses. On its last day of operation, in 1977, less than 40 people sat in the auditorium. Since it closed, there has been frequent talk of reopening the theatre as everything from a dinner theatre to a conference center, but nothing has come to fruition.

In the meantime, Proctor’s Theatre continues to slip further into disrepair, with its gilded plasterwork crumbling into dust and birds nesting in the old projection booth.

Formed in 2000, the Friends of Proctor’s Theater Troy, NY tried attempting to gain support to get the theatre restored and reopened for use as a performing arts venue/movie theatre. The Friends of the Proctors closed when the building was purchased by Rensselaer Polytechnic Institute in 2004. RPI planned to use the building as office space and a theatre, but was unable to raise the funds. It was sold to Columbia Development Companies in 2010, who in 2015 plan to abate the theatre and preserve it until it can be fully restored.

I didn’t know a group had formed to try and save this beautiful theater. How would I get in touch with them? I would like to help with this effort.

They will be very happy to hear from you Gregg!

Here are some recent photographs of the Proctor’s Troy Theatre

Here is Don Rittner’s 2010 weblog post about Proctor’s Theatre in Troy. In addition to several photos of Troy’s theater, it has considerable information about Fred Proctor’s career, and photos of several other Proctor theaters.

The March 3, 1945, issue of Boxoffice had this ad for General Electric air conditioning which featured a cross-section of Proctor’s Theatre in Troy, where GE equipment had been installed in 1940.

Joe, the link you posted is to the Rittner blog.

Rats. That’s what happens when I have too many tabs open at once.

That’s funny, the Box Office ad says the “1,400 seat Proctor’s Theatre" yet the theatre seats over 2,000 people. The illustration is definitely the right theatre.

This seems to be the nearest movie venue to Troy, NY in 2018. Very sad! Click here