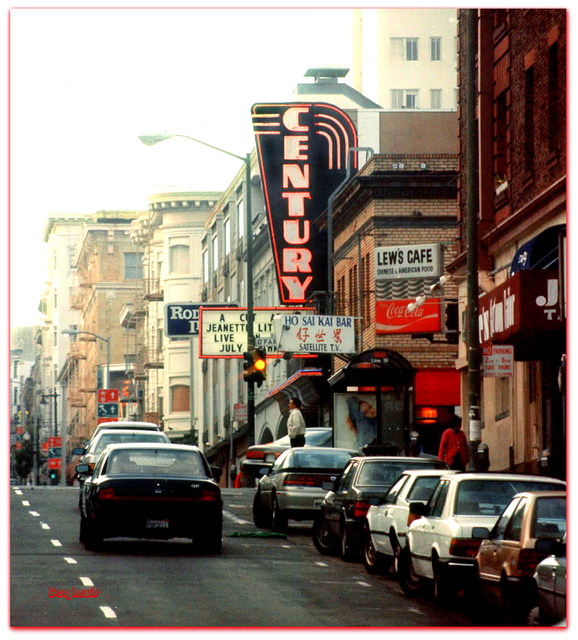 The Larkin Theater opened in 1916, but didn’t gain importance in San Francisco until the 1930’s when, together with the Clay Theater, it became a primary venue for foreign films.

By the 1950’s it had become so popular that long runs such as “Diabolique” and “La Dolce Vita” tied up its single screen for weeks and sometimes months at a time.

By the late-1970’s this was all over, it was renamed the Century Theater, and became an adult venue, and as such continues to prosper today as the New Century Theater.

“The Titan” in its third week at the Larkin Theater, San Francisco, is being exploited by Quinten Lacey, exploiteer from United Artists.

A document prepared for the NRHP says that this theater was designed by architect William Knowles. This was probably William F. Knowles, who practiced in San Francisco early in the 20th century, but as the document doesn’t specify, I suppose there is a slight possibility that it refers to the much younger William K. Knowles as the architect of a later remodeling.

The document, which is a bit ambiguous, appears to indicate that there was a theater at this location as early as 1914, that the Larkin Theatre operated as a movie house from 1920 to 1962, and that it began operating as the Century Theatre in 1980. It doesn’t offer any clues as to what went on between 1962 and 1980. A document about the Uptown Tenderloin Historic District prepared for the NRHP mentions the Larkin as a live theater that was in operation by 1915.

It looks like the NRHP document got the date of the Larkin’s conversion to movies wrong. An item in the March 18, 1916, issue of The Moving Picture World said that the Larkin Theatre, which had been closed for some time, had been remodeled and would open as “…a first class moving picture house….” under the direction of Charles Goodwin, former operator of the Elite Theatre.

This is for Joe- the Elite which you mention in your 2012 comment is not on CT. Could you insert it.

For xsallnow – If you have addresses on these venues you have more than enough to create them on CT. There are many theaters on the site without much more than a name.

robboehm: There were actually two movie houses called the Elite in San Francisco around 1916. The one that isn’t listed here was on Market Street opposite Seventh Street. The other was the house in Presidio Heights that is now called the Vogue. Our page for the Vogue is currently missing the aka.

Thanks, Joe. Hopefully the Vogue will be updated for the AKA and you will insert the other?

It has been done.

In the early 1950’s I heard the local evening news discuss the latest thriller playing at the Larkin. The movie Diabolique was a French Film with subtitles that had the city talking. One Sunday afternoon we went to see the black & white movie which had some well thoughtout scenes that I will never forget. I left a nightlight on for a week. It played at the Larkin for months. Decades later I happen to see it playing on TV but some scenes had been cut and I think it was given a different name. The Larkin was a vogue theater for its time but like many of San Francisco fine theaters gave way to television.