Previously operated by: Commonwealth Amusement Corp., C You At The Movies, Suburban Theatres 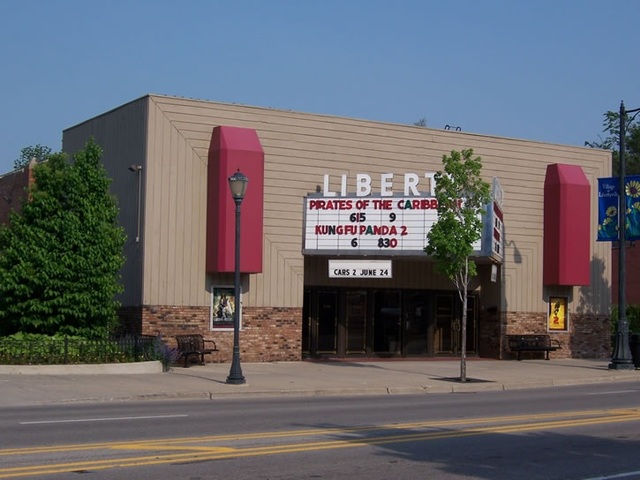 Opened on August 27, 1937 with Warner Baxter in “Slave Ship”. The Liberty Theatre was designed by architects Edward P. Rupert and William L. Pereira in the Art Moderne style including a stunning tall vertical sign. The facade was of cream-colored terra-cotta, trimmed in dark blue. It either replaced or was a total remodeling of an earlier Liberty Theatre, dating from before the 1920’s.

At some point, the Liberty Theatre lost its Moderne facade, including the vertical sign, and compared to the original, the current one is rather plain.

The Liberty Theatre was converted at some point into a twin. It was until June 2006 part of the RMC chain, and then operated by “C” You at the Movies, Inc, along with the Antioch Theatre in Antioch, the Dune Theatres in Zion, and the McHenry Indoor and Outdoor Theatres in McHenry. The Liberty 1 & 2 Theatres was closed by Golden Age Cinemas at the end of January 2020.

If they tear this theater down, my Marlon Brando comment posted above will become a distant memory.

Several theatres at one time or another served Libertyville: the Lyric Theatre, an earlier version of the Liberty Theatre, and the Auditorium Theatre. The immediate predecessor of the current Liberty Theatre, the LaVilla Theatre, was located on the second floor of the First National Bank building. However, the LaVilla had only hardwood seating and a screen which would roll up when not in use. One can imagine this did not meet the standards that the movie-going public of Libertyville was coming to expect.

Into this picture stepped Frederick William Dobe. Born in Germany in 1873, Dobe had emigrated to the United States at age 19 in 1892, eventually settling down in Libertyville. Noticing that while the small theatre on Milwaukee Avenue served its purpose and sensing a potential business opportunity, Dobe polled the community to see if they were happy with the existing theatre. Finding that the people of Libertyville were indeed looking for a more luxurious movie going experience, Dobe contracted Chicago-based architects Edward P. Rupert and William L. Pereira to design a theatre befitting a town of Libertyville’s stature.

The design that was eventually settled upon was the art moderne style with a cream terra-cotta exterior, dark blue trim, and a stunning vertical art deco sign. Able to seat 706 customers (44 fewer than promised), the theatre boasted the most up-to-date amenities. Construction on the theater began on Friday April 9, 1937 with the work contracted to the Kaiser-Ducett Company o Chicago.

In the weeks leading up to the Liberty’s opening, stores decorated their windows and had “Theatre opening sales”, light posts in the business district bore red, white and blue bunting, and almost the entire issue of the August 26 Independent Register dedicated to the theatre’s opening. On Friday August 27, 1937 the theatre opened to a capacity crowd with a large number of would-be customers being turned away, Frederick Dobe was at the front of the line, buying the first ticket. As the audience filled in they were met by Mark Fisher, a popular Chicago band leader who acted as the master of ceremonies that evening. After Fisher came a short speech by A.E. Suter, President of the Village Board, to an audience that, as one can imagine, was probably impatient for the movie, The Slave Ship staring Warner Baxter and Elizabeth Allen.

The theatre quickly became the go-to place for kids to hang out on weekends. According to Marylyn Alkire of the Libertyville-Mundelein Historical Society, in the 1940s kids would go to the penny candy store just south of the Liberty, buy a pocketful of candy and then hurry back to buy a movie ticket for 20¢. Once in the theatre they might have been escorted to their seats by a young Marlon Brando, who worked as an usher during the short time he and his family lived in Libertyville (Summer of 1938 – spring of 1941). The films they would have watched ranged from western to on-location newsreels produced by Time Inc. The theatre would have regular blackouts in the middle of movies, leaving the children in the audience to wait impatiently until the movie started up again.

The manager during the 1940s was Robert L. Collier. Born in Peoria, he was a well-known business man, avid bowler, and during the blackouts was known to send uniformed ushers to keep the kids in line.

On September 3, 1942, James Cagney visited Libertyville as part of the effort to sell war bonds. Drawing a crowd of some 4,000 at Cook Park (according to the 1940 census the population of Libertyville was 3,930), Cagney spoke on the steps of the Cook Memorial Library then located in Cook House, and the town had pledged nearly $111,000. As a reward for the town’s patriotism, Liberty Theatre was chosen to be the location of the world premiere of “Desperate Journey”, a film about a group of downed Allied airmen making their way out of Nazi Germany, and starring Errol Flynn and Ronald Reagan. As part of the ceremonies, then-Illinois Governor Dwight H. Green drove a horse-drawn carriage loaned to him by publishing magnate John F. Cuneo on Milwaukee Avenue.

In 1948 Frederick Dobe followed with the construction of the Grayslake Outdoor Theatre along Highway 120 East at Route 83. At some point after 1955 the art deco vertical sign that had for so long beckoned moviegoers of all ages was taken down. In 1960 on Saturday, June 18 at the age of 87, Frederick Dobe passed away at St. Therese’s Hospital in Waukegan. He was interred at the Ridgewood Cemetery in Des Plaines. In 2012 the theatre was bought by Scott Dehn, who purchased two digital projectors totaling about $130,000 and the theatre had a grand re-opening early that same year. The theatre then came under the ownership of Golden Age Cinemas, which also owns the McHenry Outdoor Theatre.

The owners of the LIBERTY Theatre in downtown Libertyville are requesting it be demolished, the Daily Herald is reporting. The building has been owned by the Rhyan family for more than 50 years and operated by Scott Dehn in recent years.

The theater first opened as Liberty Theatre in 1937 and in recent years has gone by the name of Liberty 1 & 2 Theatres, according to the article. The current tenant has not been able to make enough revenue to pay for rent — even after rent had been reduced three times — and ongoing repairs are needed on the aging building. The demolition request is the first being considered by the village since a moratorium on the razing of downtown buildings was lifted in April 2018.

The historic preservation commission will be the first to hear the matter and can recommend approval of the demolition, approve it with conditions, deny it or continue the matter to a future hearing, according to the Daily Herald. The village board would have the final say.

This week my friends, Country Arbor Independent Cinema Theater’s will be taking over this business. I will have new menu and the employees will be train to serve the customers and to say Yes, Sir or ma'am, how can I help you with.

A group of about 40 Libertyville residents attended a Historic Preservation Commission meeting Monday to voice their dismay over a proposal to demolish the Liberty Theatre. Three spoke in favor of keeping the building, either as a theatre or a different type of entertainment venue. The commission decided to table a vote on whether to approve a demolition request made by the owners of the theatre, the Libertyville Review reports. The public hearing came a month after the Rhyan family announced its plans to demolish the theatre. The Rhyan family has owned the downtown Libertyville building for more than 50 years. In recent years the theater has been operated by Scott Dehn, who hasn’t been able to earn enough revenue to pay for rent — even after rent had been reduced three times — and ongoing repairs are needed on the building. The demolition request is the first being considered by the village since a moratorium on the razing of downtown buildings was lifted in April 2018. The owners of the theatre said they are looking for interested buyers while pursuing its demolition request. Village officials have said they would like to see the building preserved — even if the building is used for something other than a theatre. The Historic Preservation Commission plans to meet again on Oct. 28 to discuss the demolition request. The village board will have the final say on whether to demolish the theatre.

The Liberty closed the last week of January. A pending request to demolish the building has been delayed:

Blog software turned two hyphens into an em dash and ruined the URL above. This may work better.

The Village Board, at its August 11th Village Board meeting at 8:00 p.m. will consider the Historic Preservation Commission’s recommendation to deny a certificate of appropriateness for the demolition of the Libertyville theater building. The meeting will be held virtually due to the Restore Illinois Phase 4 restrictions. Members of the public who wish to comment may do so prior to the meeting by sending an e-mail to or dropping off a written comment to the Village Hall at 118 W. Cook Avenue. The meeting agenda may be found here: www.libertyville.com/agendacenter . The virtual meeting link is located at the top of the agenda. Members of the public may also comment during the meeting by using the chat function or sending an e-mail to .

Yesterday’s update from “The Liberty Twin Theater: The Next Generation” on Facebook: “The Libertyville Village Board 7 to 0 accepted the findings of the Historical Preservation Commission to deny the demolition permit for the Liberty Theater! There is a lot of work to still be done, but this is a great first step on the path towards keeping the revitalization efforts with turning the Liberty into something we can all be proud of for years to come!” 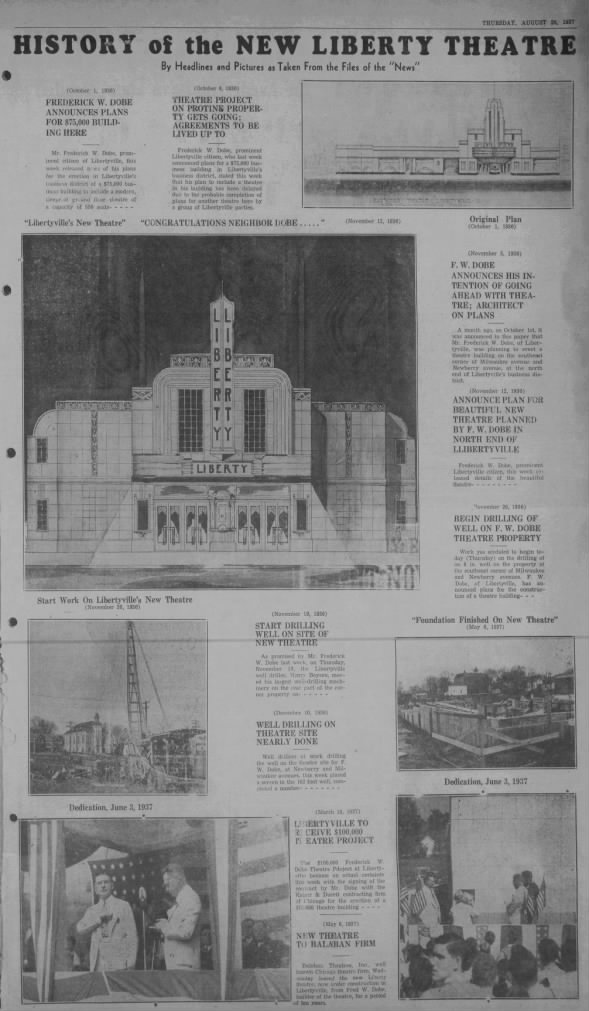