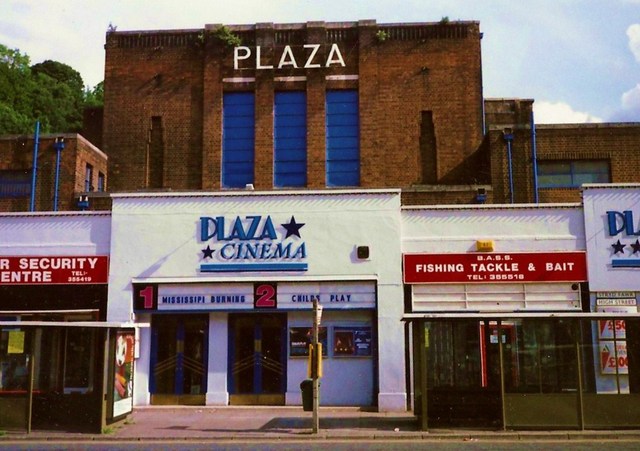 With the demolition of the Arcadia Cinema in 1930, the architects were faced with a major problem in designing and erecting a new cinema. The council wanted to take advantage of the demolition to widen the High Street at this point, which they subsequently did. This left a narrow area of land which sloped upwards away from the road, ending in a high ‘cliff’. The architects got around this problem by building the cinema in reverse, so that you entered from the front, with the stage and screen above the foyer, nearest the road and the slope was turned into an advantage with the rake of stalls aiding lines of sight and thus reducing the need and cost of excavating the hillside. Corridors and passageways and staircases on both sides of the hall enabled access to the balcony.

All these problems caused delays and it was not until August 1934 that the cinema opened its doors, but not with the planned name of ‘Capitol’, but as the Plaza Cinema. An R.C.A. Photophone sound system was fitted from the outset and seating was for 1,048 patrons at prices of 1/- to 2/-. Programmes were shown continuously with daily matinees. The owners were Saronie Enterprises.

In 1946 Guy Bakers Paramount Picture Theatres Ltd., gained control and prices rose to 1/9d to 3/6d, the first rise since opening! Cinemascope was fitted in 1956 and seating fell to 980 patrons to accommodate the new lines of sight. By 1959 matinees were run only in the holiday seasons, when holidaymakers would swell the population of Bangor. On the 6th April 1964 monthly wrestling shows were introduced and the occasional concert was also held. Following the death of Guy Baker, Hutchinsons Leisure acquired the venue and obtained a bingo licence and the stalls area was converted to bingo whilst the balcony was split into two cinemas which seated 310 and 178.

The death of Mr. Hutchinson in the late-1980’s saw ownership change once again to that of Apollo Leisure and in 1992 a major refit was carried out with new curtains, lighting, carpets and seating being provided and Dolby sound replacing the old R.C.A. system. In March 1995 ambitious plans were unveiled in the "Bangor and Anglesey Mail" to convert the by then closed bingo area in the stalls so as to provide a third screen. These plans never came about as within months of this plans were unveiled to build a 9 screen multiscreen cinema at Llandudno Junction on former the railway sidings with seating for 1,600 patrons in total.

The Plaza Cinema continued with its two screens, and was refurbished in 2002. In 2005 it was taken over by an independent operator, but was closed on 31st August 2006. It was demolished in December 2006, and student housing has been built on the site.

The empty plot of land, photographed in December 2006, after completion of demolition:
http://www.flickr.com/photos/traedmawr/338673340/

The Plaza did not close in 2001 as Mr Turner suggests,they struggled' on for quite a few years after Llandudno’s Cineworld opened.I myself saw ‘The Last Samurai'there in 2003,and I remember taking my daughte to see Eddie Murphy’s 'The Haunted Mansion’ that same year.And then again ‘Wimbledon’ in 2004.

I don’t recall what I saw there after that.The Plaza was considered to be a very important first run venue years ago,it was the only cinema in Caernarfonshire to run all films for a whole week up to the late sixties.other cinemas ran their programmes for two & three days until those days.

I took some photos at the start of demolition but at the moment Cinema Treasures are unable to take them.I’m sure Bangor being an university city with quite a large catchment area could support a small (say a 4 screen multiplex)if some cinema exhibitor looked into it.

I remembered today that Llandudno used to be in Caernarfonshire in the period I stated that the Plaza was the only first run cinema in the county.the Odeon Cinema in that town was also bound to have been of equal status.

Here’s a photo of the Plaza at the start of demolition.
View link

Have loaded 2 pictures on here

There was a refurbishment in mid-2002 (was not closed prior to that) as part of Apollo Group, and in 2005 it reverted to the name Plaza and was run for its final year as an independent. Closure was August 31 2006. Hope that helps!