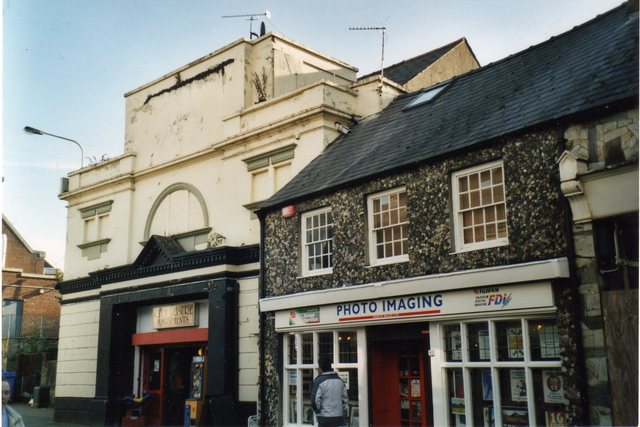 The building of this venue was commenced in 1914 but it did not open until 1919, perhaps building work was suspended because of World War I. Seating was provided for 900. Owned by Mr. J.R. Saronie, who was also to own the Arcadia Cinema and later the Plaza Cinema in Bangor, it opened with prices ranging from 6d to 1/-.

An R.C.A. Photophone sound system was installed to take the venue into the sound era. In 1952 Guy Bakers Paramount Picture Theatres Ltd. had taken control and Cinemascope was installed in 1956 when seating fell to 569 patrons. A snack bar was opened in the cinema in the early-1960’s. Children’s Saturday morning picture shows were introduced in 1970, at which time the snack bar was open all day.

With Guy Bakers death in 1983 the City Cinema closed, and when it re-opened in 1984 after being sold, it was as a snooker hall, later with the addition of an amusement arcade at the front. It remains in this use today.

A March 2009 photograph of the former City Cinema as a snooker club:
View link

Worth mentioning that the shop next door (Options) was the City Cinema cafe, which I’m sure was open right up to the cinema’s closure. I only visited the City once, to see the film “Judith” starring Sophia Loren & Peter Finch,a story set in the months leading up to the Israeli nationhood. Also went up to the projection room, they had American Equipment Super Simplex projectors & RCA sound system.

As I say it was my only visit but frequented the Plaza quite often, hard to beleive tha Bangor now has no cinemas at all. There was talk quite a while ago that a multiplex was coming to Farrar Road, the home of Bangor City FC, but of course the new Asda supermarket has started construction now.

Nothing stays the same forever I guess,Bangor’s new ground looks nice though, but that story does not belong on this site !