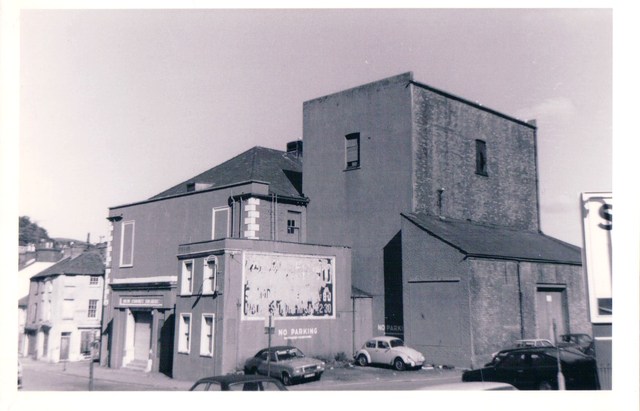 This was originally the Tabernacle Chapel, built in 1850 and closed in 1911. It was purchased by Mr. James Hare and converted by the addition of a stage some 30 feet in width and 40 feet in depth, a fly tower and a small foyer. In addition the existing chapel balcony was converted and seating for 846 people in all installed. It opened in 1912 as the New County Theatre showing films with two changes of programme per week at prices of from 6d to 1/-.

With the coming of sound a Western Electric Sound system was installed with prices rising to 9d to 1/6d.

Early in World War II the building was used by the B.B.C. to supplement its Llandudno operations. When hostilities ceased in 1944 the premises were put up for sale or rent. It was acquired by the Leslie Blond organisation and re-opened in February 1945 with prices ranging from 10d to 2/6d. Cinemascope was installed in 1956 with seating reduced to 800 patrons. Closure came in 1971, and after a spell as a bingo club it was refurbished and opened as the Octogon Night Club, in which guise it remains today.

Exterior of the Octagon:
View link

I well remember the County Cinema, Dean Street, Bangor. We lived in nearby Orme Road, and the Saturday Matinees, were a must. Some of my fellow matinee goers were a bit unruly, and every time a villain appeared,they would pelt the screen with ice cream! The county had a resident black cat, and it would often walk across the stage, during performances. Then, in my late teens, I landed a Saturday job in the projection booth, rewinding the films. The entrance to the booth was at the side of the cinema, at street level, now blocked off. Happy days!

More thoughts on the County Cinema, Bangor. On one side of the cinema,was walled area with an open entrance, where old 35mm film prints were often burned, and as a young boy, I’d rummaged through the charred remains in the hope of finding intact prints. I well remember finding prints of the Laurel and Hardy classic, Chumps at Oxford. Some of these stills, I mounted, and would project them onto my bedroom wall, with my much loved Chad Valley slide projector. Thus began my love of cinematography. Then, some 40 odd years later, I by chance, met the son of the cinema’s projectionist. We had many happy memories to share.