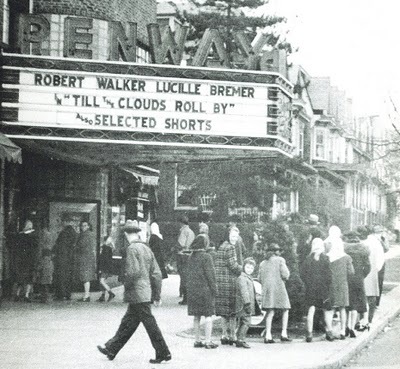 The Penway Theatre was a spacious and well-appointed neighborhood theater on State Street, one block up from Lincoln Elementary School and a block over from the entrance to Reservoir Park. It was situated on the corner of 18th Street and State Street.

A relative who lived in the neighborhood estimates that it opened around 1940 and that a ‘haunted house’ was torn down to make way for the theater.

A typical neighborhood drugstore was on the actual corner of the large and attractive brick building which also housed the theater and a small business beside it.

The Penway Theatre had an impressive triangular marquee. Under it the ticket booth was built into the middle of the entrance. Double entry doors were on each side of the ticket window.

Two display windows in polished black glass-like surfacing flanked the space under the marquee. One was for the set of eight lobby cards that came with most films in those days, and the other for a full-sized poster. Above the doors two more display windows announced coming attractions with what appeared to be hand-painted signs.

Neighborhood theaters generally showed three films a week, roughly Sunday/Monday, Tuesday/Wednesday, with Thursday, Friday, and Saturday for bigger attractions. (This schedule was variable, but pretty much followed that pattern).

Through the front doors was a fairly spacious lobby with a refreshment stand on the right and more poster windows for coming attractions on the left.

After having your ticket taken you passed though another set of doors to the auditorium. To the rear of the seating there was another open space with closet-sized restrooms and, as I remember, a mirrored water fountain and one of those popcorn machines with a glass dome where you could get a bag of popcorn for a dime. There was no balcony.

The auditorium seemed quite spacious and grand to me as a child. The high walls were decorated with what looked like panoramic Art Deco style renderings of pastoral landscapes and had large Deco-style lighting fixtures. There were exit doors to the side of the screen and along the 18th Street wall.

In the newspaper ads the Penway Theatre was linked to several other area theaters, the Grand Theatre and the Roxy Theatre in Harrisburg, and the Valle Theatre in Mechanicsburg.

The Penway Theatre was well loved and attended in its time, which probably lasted for about twenty-five years. It was eventually turned into a drugstore, which in turn went out of business. The building is currently used for offices.

Foureyes…great to hear from you!!!

First page of an article on Harrisburg theaters:
View link

I drove past the Penway today. The building is for sale. Would make for a great movie theater.

What goes round comes round. Sometimes……

Penway14…Let me ask you, why isn’t the Penway on your list of favorites?

Reading the comments already posted brings back so many memories— the Penway, Roxy, and the other neighborhood theatre operations were a family operation. This includes the VALLE in Mechanicsburg, where I saw most of the movies I attended when I was a kid—later apprenticed there and got my projectionists license and went on to run porn at the STAR and martial arts pics at the Colonial as a union projectionist! Some years later, the Valle was operated under the name Christian Arts Theatre and I had the dubious job of managing it— we tried to initiate a classic repertory cinema program, which worked for a while but kinda petered out in the long haul. Still the Valle— and that family run movie chain brings back great memories. l weigard

By the early 1960s, the Penway was owned by the Creason family, who lived in Paxtonia. Joanne Creason, who died last year at the age of 98, was a tremendous amateur golfer, and she ran the theater. She had a large family, and I was friends with her sons Johnny and Richie. Through them, I got to explore the whole theater, including the projection area.

Art deco was a main architectural design theme in Harrisburg in the first half of the 20th century, and the Penway and Senate theaters were two notable examples.

OMG, I lived in Paxtonia (Jonestown Road)! I wish I’d have known. Strange coincidence to find out so many years after the fact. The Penway was my neighborhood theater when we still lived in Harrisburg city, just off State St. My lifelong love of movies started there, attending with my parents.

Ross, in what years did you live in Paxtonia? The Creasons lived on Jonestown Road, across the street from what is now the post office. Also on that block lived Michael Korn, a reclusive kid who later became a famous classical musician.