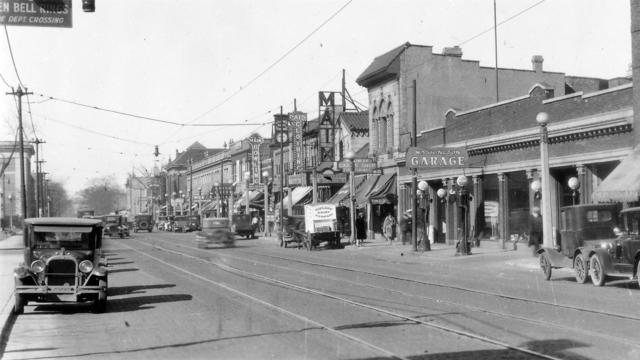 Originally opened in 1915 as the Triangle Theatre, it was re-named Park Theatre in the 1920’s and the New Main Theatre in 1928. The theatre became part of the Balaban & Katz chain in 1936 and was remodeled by the firm of Pereira & Pereira. It was renamed the Coronet Theatre February 19, 1937. The Coronet Theatre was one of the smaller of Evanston’s movie theatres, which included, among others, the Varsity Theatre, the Valencia Theatre, and the Stadium Theatre (later renamed the Evanston Theatre).

This Art Deco style movie house sat just over 800, and remained a first-run theatre for decades, before it began to decline in the 1970’s, due to the abundance of larger multiplexes opening up in neighboring Chicago and nearby suburbs.

Here is a brief view of the Coronet in a Drivers Ed video, as found by David Zornig

A glimpse of the Coronet is visible in the background of this painting by Walter Burt Adams.

We are selling the Coronet Marquee, that was used before it was demolished. We am hoping to sell it to a collector. Contact me for information. Rosa

If I e-mail you, can you supply marquee photos I can upload to this page?

Incredible 1938 photo added courtesy of Sherry Drew. It shows the original Coronet marquee after the renaming. The W.C. Fields film showing was originally released in 1934.

This opened as Coronet on February 19th, 1937. Its grand opening ad in the photo section.

Broan’s link goes to a photo of the Granada. I think this might be the photo he intended to link to.

The Coronet marquee was at Architectural Artifacts in this photo dated July 13, 2016.