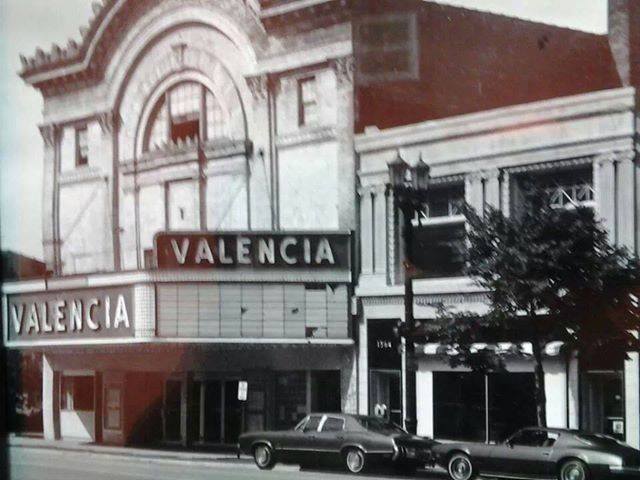 The Valencia Theater was acquired by the Chicago-based Balaban & Katz chain not long after it reopened. It later was operated under B & K’s successor chains, ABC Theatres, and finally Plitt Theatres.

The Valencia Theater, one of downtown Evanston’s most popular movie houses, closed in 1975.

The Valencia Theater has since been razed, replaced in the early-1980’s by an eighteen-story building that now houses the world headquarters of Rotary International.

When the Valenica closed, there was an article pointing out that it went back to Vaudville Days and Ann Margret had watched “Rebel Without A Cause” there countless times. I saw rereleases of “American Graffitti” there, as well as MASH. Also a terrible Christopher Lee Fu Manchu Movie, and the first Billy Jack movie “Born Losers.” Best of all was “Kansas City Bomber” on a double bill with “Ben.” Compared to the Varsity, it was a real little dump, but it had a great location and from the comments some real memorable events.

Here is a brief view of the Valencia in a drivers training video, as found by David Zornig

That video is great. It shows exactly where the theater was on the block.

I grew up about 2 blocks from “Evanston’s Perfect Sound Theater” in the late 60s/early 70s and spent many hours there. I remember seeing “Chariots of the Gods?” and “The Outer Space Connection” there, as well as several of the Charlie Brown movies. We moved away right about the time it was torn down to make way for the American Hospital Supply building (now the HQ for Rotary Intl.)

Evanston artist Walter Burt Adams painted the Valencia several times, including one very sad one of the demolition. Some of these are available on the Evanston Public Library web site:

There is a circa 1922 photo of the New Theatre around page 23 in the below link. Copy & Paste to view.

5 new images added to the Photos Section since December of 2014.

It was renamed the New Evanston sometime prior to December 5th, 1925. Print ad from that date added via David Floodstrand.

Updated history courtesy the Evanston History Center: “Originally called the Evanston Theater, it opened as a 950-seat vaudeville theater in 1911. Over the years, the theater changed hands, suffered fire damage, and was renamed three times: In 1917, it briefly became the “Evanston Strand Theater,” and then in 1922, it was renamed the “New Evanston Theater.” Finally, in 1932, it became the Valencia Theater, after an extensive remodeling and takeover by the theater chain corporation, Balaban and Katz.”