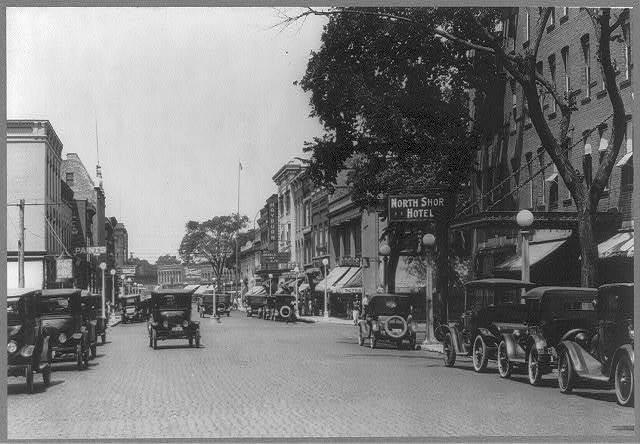 The Hoyburn Theatre, one of Evanston’s earlier movie houses, opened December 15, 1914, across from Fountain Square on Davis Street between Chicago Avenue and Orrington Avenue. The Hoyburn Theatre was closed in 1927 and was converted into a music store. In 1943, the buildings' owners Balaban & Katz donated it to the American Red Cross for its headquarters. It was demolished in 1966 to build a drive-in facility for the State National Bank.

This from the Chicago Tribune of November 2, 1943:

“The four story Hoyburn building at 615-17 Davis street, Evanston, has been given to the Evanston branch of the Chicago chapter of American Red Cross by Balaban and Katz corporation, William Hollander, vice president of the theater company, said yesterday.

The building, which formerly housed the 850-seat Hoyburn Theater and is valued at $30,000, will make it possible for the Red Cross, thru addiditional facilities, to extend its activities along the north shore. Harry L. Wells, chairman of the Evanston Red Cross branch, said that various home services will be operated in the area between the northern city limits of Chicago and the south limits of Waukegan.

Wells said the Red Cross will use the entire building as rapidly as it can be occupied."

I have a photogragh of 48 young ladies taken by Eugene Ray (photographer) in the Hoyburn Building Evanston, Illinois sometime in the 1920s. It shows he had a studio in the building. The ladies could be teachers or secretaries. Is there a photo of the original Hoyburn Building? It’s always a shame to lose part of our past. Especially the old theaters.

David Zornig found this photo showing the Hoyburn in the distance

The 5th building in was either torn down or refaced to become the Hoyburn Theatre by 1914.

This building is proposed for the former Hoyburn site.