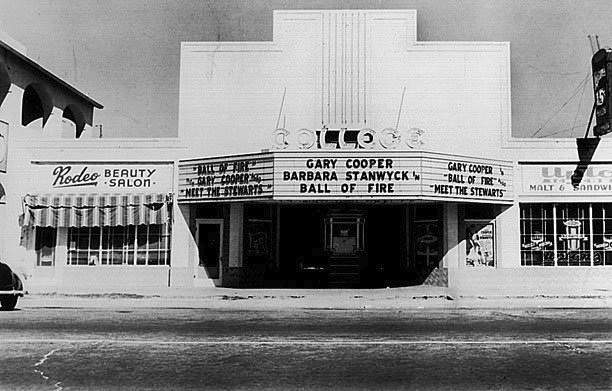 The College Theatre opened November 21, 1940 by Harry L. Nace Theatres chain. It was the third theatre in what has since grown to become the Southwest’s largest independently owned chain, Harkins Theatres. On December 30, 1960 it was renamed Valley Art Theatre.

I was in high school in the mid seventies in Tempe, and attended six or seven midnight screenings of “The Rocky Horror Picture Show,” which they showed for years and years. I remember they also showed “Pink Flamingos” a lot—I also saw that there. When I was in college at Arizona State, my friends and I saw movies there constantly as it’s right on the edge of campus and within walking distance of many of the dorms. At that time (70’s and 80’s) it was one of those charmingly run down places with ancient, uncomfortable creaky seats (the original ones, probably. the Biograph Theater in DC was like that, too). The lobby had a mural that was made up of a collage of cut-up movie posters, glued to the wall and covered with some kind of shellac. I first moved to Arizona in 1972 at the age of 10, and one of my more vivid memories of the time is of going with my mother (a professor at ASU) to see something or other at the Valley Art, and seeing a surrealistic coming attraction trailer for “El Topo.”

When I was in the forth and fifth grades (1953-54) attending Mitchell School we would ride our
bikes to the College Theater on Saturdays to see the matinee. Cost of admission was 35 cents.
We parked our bikes on the sidewalk in front of the theater with no locks. Every year Mr.
Harkins showed a movie for free and gave each of us a free candy bar.

I sold tickets and popcorn at the Valley Art 1977-78 during its transition from independent to Parallax Theater Systems. Our format was three double features per week plus Friday and Saturday midnight shows. The theater seated 450 and the one screen was mounted on a real theater stage. Bill Grieg was the projectionist and lived nearby; if it was broke, Bill fixed it. I heard he passed away in 1987. Jan Ogsbury was the Manager. The lobby was often a gathering place for locals (architects, street people, students, etc.) who would stop by for coffee and chat about Mill Ave and the neighborhood. We were even visited by a movie star! ;–) (A tall fellow came in one day, claiming, among other things, to have run into a film crew while on vacation in the South America. Two weeks later, Werner Herzog’s Aguirre the Wrath of God came to the theater and, true enough, our visitor, Tempe resident Edward Roland appeared in the movie with a speaking part!)

Did you know that Werner Herzog has just released a film produced by Elton Brand of the Clippers? How’s that for a combination? The film is getting decent reviews, too. I think it’s called “Rescue Dawn”.

I was the assistant manager for most of the first half of 1979, and worked under Jan Ogsbury. I was 23 years old when I was hired. Although I was only at the Valley Art for a short period of time, itâ€™s the most memorable job I have ever had.

I remember a guy who worked there named Casey, who left shortly after I arrived, as well as a really sweet girl named Helen. There was another girl whoâ€™s name I donâ€™t recall, but I do remember having a crush on her. She was a huge Yankees fan, and that was right around the time of the plane crash that killed Thurman Munson. She was pretty broken up over it, and I felt really, really bad for her. There were also these two guys who I think were brothers who didnâ€™t work at the theater, but who would always stop by to chat before we opened. They were really smart and seemed to know something about nearly everything we would talk about. They might have been twins, but Iâ€™m not too sure about that.

There was another regular at the Valley Art who wasnâ€™t an employee, but she might as well have been. Her name was Pat (her last name escapes me), and she was the self-appointed â€˜den motherâ€™ for all the Rocky Horror midnight shows. She was a very dedicated RHPS and Tim Curry fan. We always let Pat in for free, and she really kept things under control during the shows. After all, we always had a theater full of young people (including some who had been drinking), holding newspapers over their heads and firing up their Bic lighters. Pat made sure that no one ever started a fire, or was otherwise obnoxious. She was a real gem, and was very much a part of the Valley Art family. I remember we shared the same birthday, and I have some very fond memories of her.

Of course I remember Bill the projectionist. He was quite a character, and despite his outward appearance, he was a nice, gentle man (although he was rather protective of his projection room!).

I can easily recall my most memorable night at the theater. I was in charge that night, as Jan was off. We had just gotten everyone settled in the house for Rocky Horror, and I was in the lobby when the preview reel started. Now, I have to explain that we changed films every few days, and the reels were â€˜bicycledâ€™ to us by a delivery truck from Parallax. Those 35 millimeter film reel cans were extremely heavy. Bill couldnâ€™t lift them due to his condition, and it was all the rest of us could do to heft those puppies up that old, steep, narrow flight of stairs to the projection room. As an aside, thereâ€™s an episode of Northern Exposure where theyâ€™re having a film festival in Cicely, and the Janine Turner character is seen lifting the same kind of big film reel cans out of the back of her truck like they were boxes of doughnuts. I always get a big laugh out of that episode whenever I see it. Butâ€¦I digress. Although the films got bicycled to us from other theaters in the Parallax chain, all the promotional materials (press kits, one-sheets, trailers, etc) were shipped from the distributors directly to the Valley Art. Now every once in awhile, we would exhibit cut-down R-rated soft core versions of what were originally X-rated pictures. We would never get the X-rated version of the actual films, but since the distributors didnâ€™t know what kind of an â€˜artâ€™ theater we were, we would either receive the R-rated trailers, X-rated trailers, or both. The X-rated trailers always had a big red band around them with a printed warning, and of course, we were never to exhibit those.

Anyway, I was in the lobby when the preview reel started (you can see where this is going), and all of a sudden I heard some very loud shrieks, gasps, wolf calls, and all sorts of garden-variety screams coming from the house. I stuck my head in the theater and there on the screen, our Rocky Horror patrons were being treated to full-blown (no pun intended) hard-core sex. Usually Bill screened the preview reel before showtime, but for some reason that night, he didnâ€™t get to it. He claimed that he didnâ€™t put anything in the trailer reel with a red band, and I always believed him. Somehow, the red band never found it’s way to that particular trailer. I remember Bill felt bad that it had gotten by him, but by that time-there was really nothing we could do about it. Here we had all these â€˜donâ€™t dream it, be itâ€™ theatergoers who probably thought they were pretty sexually sophisticated. Keep in mind that a lot of these kids were still in high school, and it amazes me to this day that we didnâ€™t get a single complaint from a patron, or more importantly, a parent.

I worked for a small chain of Art Theatres from 1963-1973. The company was Art Theatre Guild, Inc. Founded by Louis K.Sher in Bexley, Ohio in 1955. The company moved its HQ to Scottsdale, Arizona in 1963. I started my career working at the Valley Art, along with the Kiva and Portofinos in Scottsdale. I was promoted to manager in 1964 and sent to Tucson to operate the original Loft Theatre located at 6th & Fremont, which I also lived in. I also managed the Fine Art in Fresno, The Rockhill in Kansas City, Missouri. The Cinema in Hollywood, the Art Theatre in Dayton along with the Little Art in Yellow Springs, Ohio and The Bexley (then first twin theatre in America) in Bexley, Ohio along with the World Theatre in Columbus and the Opera House in Granville, Ohio. I was the manager of the Bexley and World theatres from 1969 – 1973.