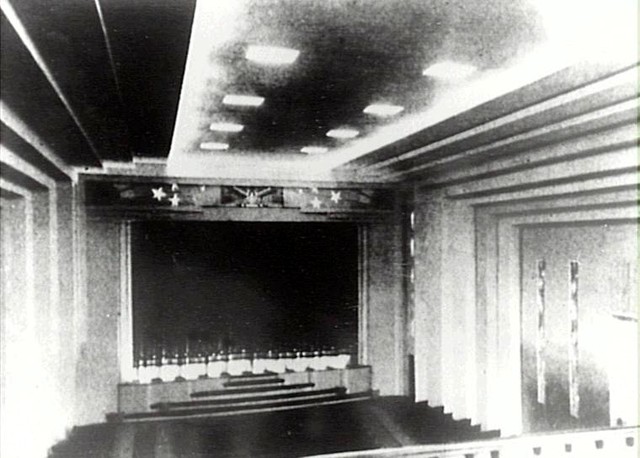 Located in the south-western Sydney suburb of Campsie. The Orion Theatre was opened on 3rd April 1936. It was named after the bright constellation, and was known as the ‘Theatre of the Stars’. It was independently operated until 1953, when it was taken over by Greater Union Theatres.

Last operating as as Fridays and Saturdays only operation, it was closed on 31st January 1959. It was purchased by the local council in 1964, and converted into an indoor market.

In 1984, it was refurbished, and still owned by the local council, is in use as a banqueting hall and community centre.

The Wurlitzer 3Manual/15Rank organ originally in the Capitol Theatre, Sydney city centre, has been installed into the Orion Theatre, and is now played at regular concerts organised by the Theatre Organ Society of Australia (TOSA), New South Wales Division.

The Orion was looking very run down howver it has had a fresh coat of paint and is looking fabulous again. You can see the new look on this page.

The Campsie Orion Theatre had seating for 999 persons and boasted a long wide foyer, elegant appointments and sparkling mirrors. The Campsie Orion was independently operated and in 1949 was given a face lift.

The stalls had a parabolic floor and a deep exaggerated curve which allowed unrestricted vision from all parts of this area. With concealed auditorium lights and colorful red, blue and silver stage curtain, it was indeed an impressive house – without doubt one of the best in the suburban area. The Orion was taken over by Greater Union in 1953 and operated on a restricted policy, screening only Fridays and Saturdays for a period before closing in 1959.

Canterbury Council Purchases the Building Canterbury Council purchased the building in 1964 with the view to converting it to a public hall – Canterbury Town Hall, located on Canterbury Road, Canterbury, had been demolished that same year. Between 1959 and 1984 the Campsie Orion Theatre building served as a community market, public meeting place, theatre rehearsal venue and migrant neighborhood centre.

Orion Centre During 1984 Council began extensive restoration work on the building with the view of using it as a multi-purpose community function centre. Restoration work in the main hall brought the building back to its former Art Deco grandeur. The additional building work carried out by Canterbury Council provided a stage with the impressive dimensions of 12 by 18 metres, and, on a lower level, dressing rooms and storage facilities. The main hall now provided seating for 650 persons. The mezzanine and foyer areas were made available for smaller functions. After the Campsie Orion Theatre building was restored by Canterbury Council, it was renamed the Orion Function Centre but is generally referred to as the Orion Centre.