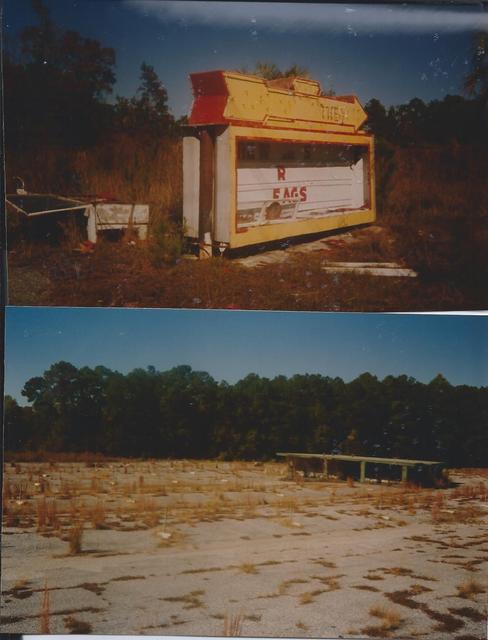 Well, its a drive-in I actually got out of my car in the early-1990’s to tromp around. Oh yes, it had been closed for years, but everything was there, but for the screen. Long gone, the red and yellow marquee (I think they were the colors} looked in bad shape and some local rednecks just had to spell a dirty word on the marquee. I took pictures anyway. The concession and booth were on one level and really not that bad of shape, with ceiling tiles and light fixtures still in place. Today, no telling what is there now.

The U.S. 1 Drive-In is at least one of two drive-ins on U.S. 1 which heads all the way to Maine. The other being the Nunber 1 Drive-In, in Augusta, Georgia.

After U.S. 1 leaves Augusta it heads right into South Carolina. This Waycross Drive-In opened in June 1950. It parked 300 cars and was owned in 1956 by United Theatre Ent. I am pretty sure it closed under the Georgia Theatres banner. All in all, it looked like a great drive-in. Wish the screen had been up, but at least I got pictures.

Yeah, I agree with you on the PC stuff.

Thanks Stan for the pictures.

April 26 1970 NOW PLAYING at the U.S. ONE DRIVE-in is “ANGEL,ANGEL,DOWN WE GO” and “TWO GENTLEMEN SHARING” Even Those movies were R-Rated the U.S.1 must have had policy of “NO ONE UNDER 18 ADMITTED” was all over the ads.

“Sharkey’s Machine” and “Firefox” play as a Double feature. Burt and Clint.

This opened on May 25th, 1950
Multi-page grand openings are at these pages at View link

Property all grown up. had to push through trees and brush to find the concession building. It was falling in. Nothing else remained except the tile floor of the screen tower building.

WAYCROSS, GA. – The new 500-car U. S. 1 Drive-In erected by the Georgia Theatre Co. at a site on Route 1 was opened near here recently. With its entrance on the Alma highway, the new open-air theatre is surrounded by tall pine trees. Offices and living quarters for the manager are located in the base of the 60x61-foot screen tower building. Space between the tower and the first parking ramp will be used later for a playground for children.

A 40x43-foot concession building in the center of the parking area includes the projection booth and storage rooms. Motiograph projection and sound equipment was furnished by the Wil-Kin Theatre Supply Co., Atlanta. Bottle warming service is among conveniences available for patrons.

William K. Jenkins is president of the George Theatre Co., which also operates the Lyric, Ritz and Carver theatre here. John Harrison, city manager for the company here, will supervise operation of the new drive-in, with Charlie Williams as manager. Williams M. Capps is in charge of concessions, and Edward Hunter is projectionist. Mrs. Wanda Huckaby is cashier.

Three pictures of this location while in operation added to the photo section. One is a nighttime shot with the signage in the back of the screen lit up.