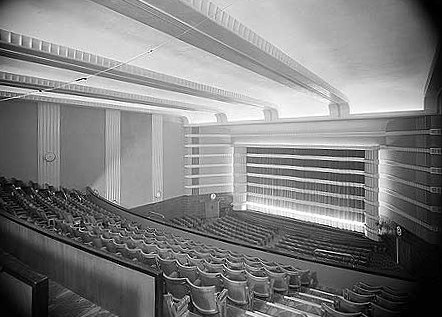 One of the original Odeon Theatres built by Oscar Deutsch for his chain of Odeon Theatres Ltd. Located on King Street at the corner with Broad Street in the seaport town of Ramsgate. The Odeon Ramsgate was opened on 22nd August 1936 with Gene Gerrard in "Where’s Sally". It was splendid example of 1930’s Art Deco style, with the façade clad in opaque glass tiles. There was a slab wall extending out from the centre of the building, which had the word ‘CINEMA’ across the top, with the Odeon name placed on a vertical fin feature.

Inside the auditorium, seating was provided for 1,034 in the stalls and 534 in the circle. The decoration was long streamline bands along the length of the ceiling containing indirect lighting, and similar bands running horizontally around the proscenium splay walls.

The Odeon was taken over by the Classic Cinemas chain in December 1967 and was re-named Classic Cinema from 10th December 1967. The auditorium was twinned, with a cinema still operating in the former circle, while the stalls became a Mecca Bingo Club. In 1983, the bingo club was converted into a second screen, opening on 30th June 1983 with "Flashdance".

The Classic Cinema was closed on 17th October 1985 with "Cocoon" and "Nightmare on Elm Street". It was demolished in 1988, and an Iceland Supermarket was built on the site. The adjacent parade of Odeon shops and flats were retained.

A set of vintage photographs of the Odeon Ramsgate here (click on the ‘right’ arrow above each photo to forward to next photo):
View link

Despite a petition to Cannon Classic to save this cinema not being successful, the support made out a case for equipping the Thanet DC’s Granville theatre with a screen and projector from 1986.