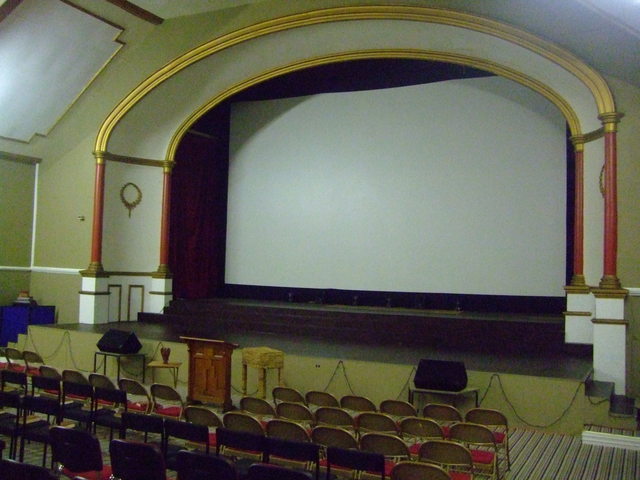 The King’s Theatre is located in the narrow Kings Place, off King Street at Harbour Street. It was built on the site of the Red Lion livery stables, and was designed by a local architect. The King’s Theatre opened on 17th November 1910 and was a spacious cinema, with a balcony and a high pitched roof.

Patrons entered a tiny foyer at street level, then ascended a staircase to the stalls foyer. A further curved staircase led to the balcony which was supported on cast-iron pillars. There were 6 stained-glass windows across the rear of the auditorium. The pillard and rounded proscenium arch was painted in white and gold, with the remaining interior being in green and gold panelling.

The King’s Theatre was taken over by the Classic Cinemas chain in June 1978, and the cinema was redecorated in dark blue, with gold and silver stars.

Unfortunately, the rectifier burnt out in early-November 1982, and as Classic Cinemas also owned the former Odeon along the road, they decided not to renew the rectifier or spend any more money on the King’s Theatre, and it never re-opened. In 1983, there were plans proposed to convert into a live theatre, but these came to nothing.

By early-1989, it had been converted into the Kings Church. In January 2011, it re-opened for live performances, with the profits going towards the building’s upkeep. A return to cinema use was envisaged, screening film classics. The church moved out of the building in early-2016 and the building was ‘For Sale’. In 2017 it became a Hindu temple.

Photo of the Kings here:–

As of July, 2016 the big screen remains in situ as Mr Hoult cannot find a suitable place to relocate it, but no use has been made of the building

In 2017 the building was occupied and became the Sri Swame Dhurgai Amman mandir, or Hindu temple. No external notices welcoming visitors, but perhaps this may change.