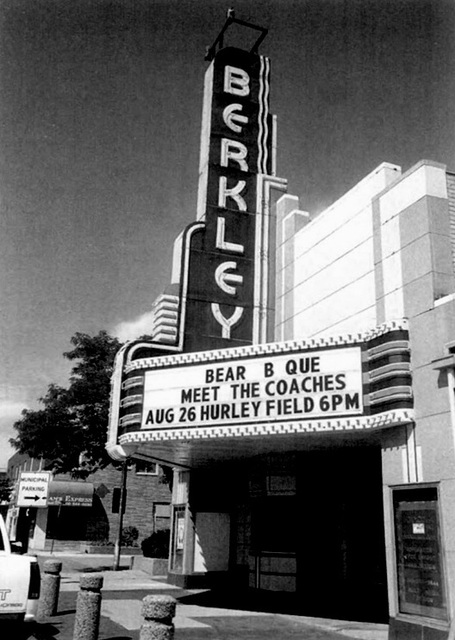 Opened in 1940, the Art Moderne style Berkley Theatre could seat 851 and screened first run features. Its sleek and curving facade featured a tall vertical marquee with the theater’s name on each side.

By the late-1970’s, the Berkley Theatre had switched over to second-run fare. In the early-1990’s, the theatre was showing a mixture of first and second-run films.

Unfortunately, this beautiful neighborhood movie house has since closed.

My Aunt and Uncle lived in Berkely. I saw “Five Easy Pieces” in this house in 1970 just before I graduated from high school.
Dan Whitehead
Irving, Tx.

this is the theatre I started my usher life at. richard komer sold it to rite aid. Komer owned the theatre and the shops that were in front of the theatre. He used to rent them out. there was a resale shop and a baseball card place there at one time. Rite aid opened up out the back of the 851 seat theatre. the box office, concession area and the doors to the theatre were preserved and can been seen along with 2 seats from the theatre when you walk by the front.

Here is another photo:
http://tinyurl.com/yj3mwqm

Closed and a Rite Aid drug store opened in the space, but the marquee and sign were left up and still operate, local events and such are listed on the marquee.

The Berkley Theatre was built by my grandfather Albert S. “Al” Johnson’s Johnson Construction Company, which was based in Birmingham.

The two accompanying images were shot by my grandfather in May 1949. The film “Johnny Belinda” was being shown a the time. The art moderne (or art deco) exterior of the theater has the porcelain-like tiles and the red and cream color scheme typical of Johnson theaters of the era. Four pairs of doors with matching geometric glass panes were said to have been patented by my grandfather and were known as “Johnson doors.” These doors were a feature in many of his 1940s-50s theater projects.