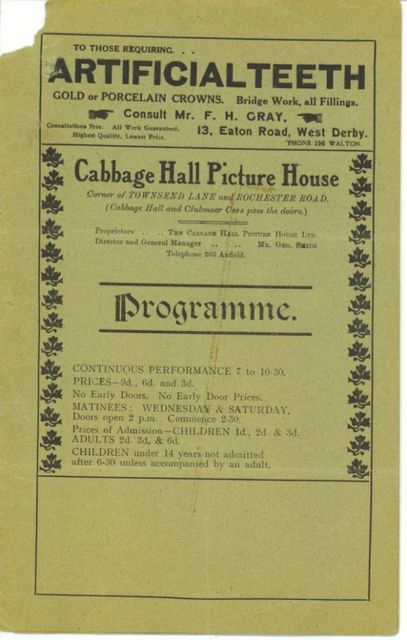 Located in the Anfield district, Northeast of Liverpool city centre, not too far from the Liverpool Football Club’s Anfield Stadium. The unusually named Cabbage Hall Picture House was purpose built as a cinema, and was opened on 15th November 1913 with "No Riches Like Love" and "The Marusc’s Child". Designed by Liverpool architect E.A. Aldridge in a Tudor style, the foyer and auditorium had wood panels on on the lower side-walls. Seating was provided on a single floor.

The Cabbage Hall Picture House was taken over by the local Bedford Cinemas Ltd. chain in 1943. It was closed on 31st January 1959 with David Tomlinson in "Up the Creek" and "West of the River".

After a while, the building was purchased by the Liverpool Football Club for use a a supporters social club and a new facade and entrance has been built.

Any idea where this rather odd and unattractive name came from? Was there a cabbage patch nearby? Or maybe a wholesale produce exchange? Or perhaps it was originally built by someone named Cabbage, or named for an earlier meeting hall in the area??

It is a strange name,and smelly too.

Cabbages were grown in the neighbourhood.