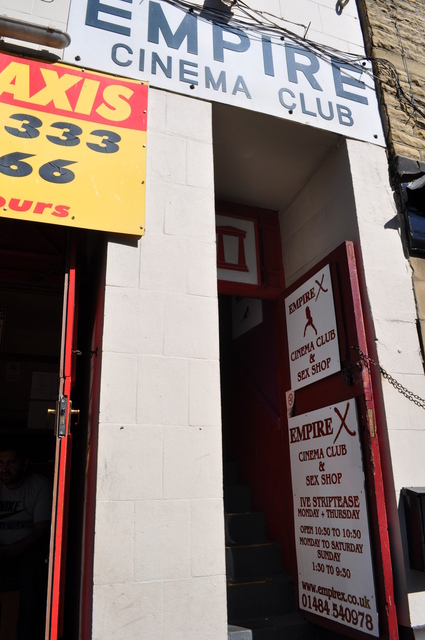 The Empire Picture House opened on 8th March 1915 with “Kismet”. It was designed by the local firm of Stocks & Sykes in a Greek Revival style, and had 870 seats divided between stalls and single balcony which had an unusual three-sided flat front.

It was taken over by Associated British Cinemas(ABC) briefly in 1933 and disposed of to Goldstone Cinemas (an independent) in May 1940. It was closed and modernised internally at this time, when it was given an Art Deco style. There was a new larger proscenium and detailing of the flank walls containing concealed lighting. In 1946 it was taken over by the J.F. Emery Circuit, and they operated it until 1971.

It became a sex cinema, after film baring caused such problems that the owner gave up trying to book commercial films. This has gradually shrunk in size (it now occupies a small part of the balcony, but unlike almost all other such venues, it has not closed completely and operates as the Empire X Cinema Club with 2-screens.

In recent years a bed warehouse occupied the tiny foyer with a cyber café in the rear stalls area. The sub-divided front stalls area is used for bed storage. In 2011, the front foyer is in use as a second-hand clothing shop. The front part and the ceiling are in poor condition although the façade has been redecorated in the spring of 2002.

In 1998, the Empire Picture House was designated a Grade II Listed building by English Heritage.

Does anyone have info on the Empire in the 1930’s or 40’s.. my great Grandfather was manager there when it was a ‘respectable’ cinema!
thanks

The Kine' Yearbook 1937 gives a seating capacity of 840 during the period of time it was operated by ABC Cinemas.

Many thanks Ian, much appreciated.
I’ll take time to look at your flickr photos of other old theatres etc – cheers.

thanks also KenRoe – I realised I hadnt replied to comment before.

Anybody know where I could find pictures of the Empire from it’s heyday??? My friend’s buying what is presently ‘cybernet’ and we want to return it to it’s former glory as far as is possible – in the interior decoration at least.
We’d especially like to have some old pictures of it’s heydays up on the walls!
Any help would be greatly appreciated!

A few more photos of the interior in September 2007 here:–

The shop area (the major part of the auditorium) is now in a very poor condition internally, with much of the art deco plasterwork present in 2007, now stripped out. The sex screens (located in part of the balcony)have apparently reopened after the COVID lockdown. Photo September 2021:-