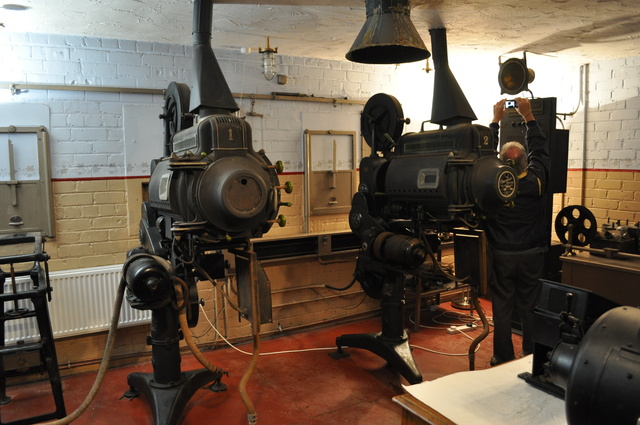 Originally opened as the Olympia Cinema on 12th October 1912, it was located on Viaduct Street between Green Street and Oxford Street and was around the corner from the (now listed) Empire Picture House, it is one of the towns oldest cinemas.

After a short period of closure, it re-opened on 25th December 1916 as the Star Picture House and from 11th February 1929 was re-named the New Star Picture House. It was known locally as the ‘fleapit’ or ‘the rumble’, the latter is probably due to the fact that the railway carrying the mainline trains into Huddersfield Station is only 20 feet accross the road. On 3rd August 1939 a fire broke out in the building which destroyed the stage and screen.

Renovated and remodeled in an Art Deco style to the designs of architect J.H. Freer of Kirkgate, Huddersfield, it reopened as the Majestic Cinema on 25th January 1940. The Majestic Cinema continued in business until 1964. It became a retail store known as Majestic Designs.

The auditorium became a car repair facility known as Majestic Motors and apart the stalls area, the cinema remains totally intact in use as a car storage and hire firm. The projectors and equipment are still positioned in the projection box. The current owners take great pride in the upkeep of the building.

The Majestic is still located on viaduct street. Majestic Designs only started operating in the 1990’s- before that it was used for car storage for Majestic Motors. I believe the present owners are interested in the history of the building and are happy to show visitors the former cinema should you choose to ‘knock at the door’

I remember attending the “Star” Saturday afternoon matinees in the early 30’s when the admission price was tuppence.Sometimes we were given an apple at the box office and ,occasionally,we would be allowed in by giving an empty jamjar bearing in mind that these fetched tuppence when taken back to the Co-op.
Regarding the fire in 1939 my Father played the drums in a dance hall in the same building when the fire occured.Needless to say all the instruments were lost and,not being insured,he never played the drums again.Derek T.