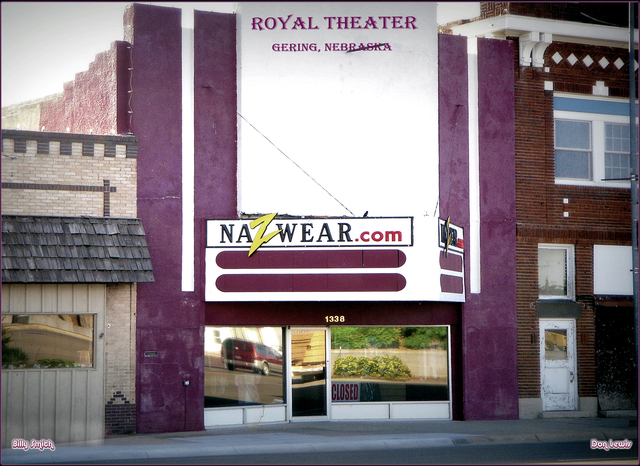 The Theatre Royal was opened on September 18, 1916 with a live play “In the Shadow of the Cross”. When the run of the play ended, it went over to use as a movie theatre, renamed Royal Theatre. On April 17, 1932 it was renamed Grove Theatre. By 1950 it was operated by Gibraltar Enterprises Inc. and it was closed on December 19, 1957. On October 13, 1962 it was reopened with “The Fisherman” but this was a short lived opening and it became a show store.

From 2010 an image of the Royal Theater building in Gering.

Anyone have info or old photos?

I’ve lived in Gering my whole life, and never knew that building use to be a theater. It must have closed a long time ago. I’d love to see any old photos of this place.

The Royal Theatre was in operation by 1917, when a promotion involving it was the subject of this item in the September 15 issue of Motography:

“The management of the Royal Theater and the merchants of Gering, Nebraska, are experimenting with a free ticket plan which will continue in effect until October 27. Under the operation of this scheme purchasers of goods are receiving tickets with what they buy, entitling them to one admission on each ticket to the Monday night and Saturday matinée shows of the Royal Theater. As tickets require no extra outlay of cash the bills being footed by the business men engaged in the plan, it is expected to prove a satisfactory trade inducement.”

Gibralter Enterprises has closed the Rex, Casper, Wyo., the Motorena drive-in, Greeley, Colo., and has placed the Grove, Gering, Neb., on one change a week – weekends.

In 1916, P.G. Armbus purchased the Pastime Theatre from L.J. Cross. Dissatisfied with the Pastime, he began development as the proposed Queen Theatre. It launched as Theatre Royal (after a soft launch with a movie serial) with a live play, “In the Shadow of the Cross” on September 18, 1916 but continued thereafter as a movie theater, the Royal Theatre. Earl Kipp of the competing Gayety Theatre took on the Pastime. The Gayety was closed shortly thereafter followed by the Pastime. Professor Charles L. Henning took over the Royal organist duties thanks to his knowledge of the Wurlitzer and improvisational skills in 1919.

Burr B. “B.B.” and Clara Grove took on the venue relaunching it as the Grove Theatre on April 17, 1932 with George Arliss in “Millionaire.” The theatre’s business dwindled in the TV age dropping to Saturday/Sunday operation in 1957. It closed on December 19, 1957 due to “the continued complete absence of adult attendance.” On October 13, 1962, new operators took on the Grove for one more show with “The Fisherman” at the relaunch with Jim Langford managing for the Commonwealth Circuit. It closed not long thereafter. The building became a shoe store.