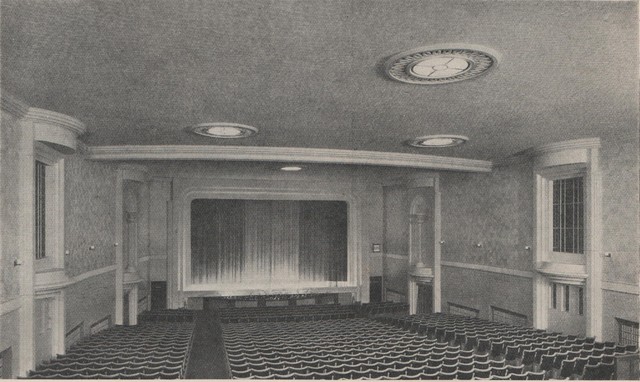 Located in The Square, bounded by High Street, Ock Street and Bath Street in Abingdon, Berkshire. The Regal Cinema was built for and operated initially by an independent exhibitor. It opened on 8th June 1935 with Grace Moore in "One Night of Love" and Ralph Bellamy in "Girl in Danger".

It was an imposing brick building, which had its centrally placed entrance flanked on each side by a shop unit. Inside the auditorium, seating was provided on a stadium plan, with a raised stepped section at the rear. There were 750 seats in the stalls and 250 in the raised section. The Union Cinemas chain took over in 1936, and in October 1937, they were taken over by Associated British Cinemas(ABC) chain.

ABC continued to run the Regal Cinema for almost the remainder of its cinematic life. Part time bingo was introduced in 1969, and there were plans to convert to a full time bingo club, but these were thwarted by a petition urging to retain films. Soon taken over by the Star Cinemas chain films were dropped, the last programme being "Flesh Gordon" and "Torso".

It became a full time Star Bingo Club, which was taken over by independent operators in 1977, and films were re-introduced as part of the programming. Several operators later, the Regal Picture Palace (as it had been re-named in its final years) screened its last film Michael Keaton in "Batman" on 14th September 1989.

The building stood empty and increasingly derelict for the following 14 years, and was demolished in 2003. Housing named Regal Court was built on the site.