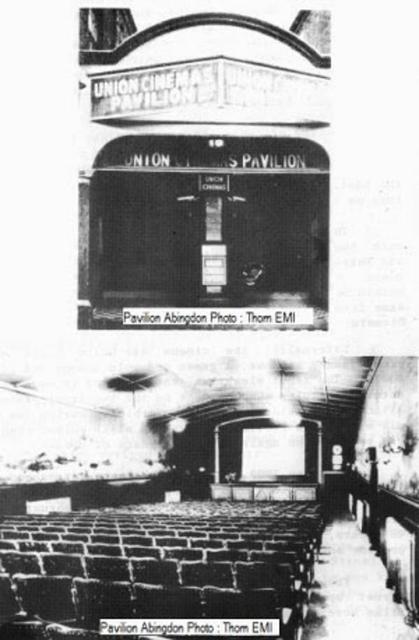 Located in Abingdon, Oxfordshire, on the corner of Stert Street and Old Station Yard. The Picture Palace opened with 300-seats on 18th May 1912. It was enlarged to 600 seats and re-opened as the Picture House on 8th July 1920. All seating was on a single sloping floor.

From September 1921, it was re-named Abingdon Kinema, and in 1936, it was re-named Pavilion Cinema when taken over by the Union Cinemas chain. The plain auditorium was made more interesting by painted murals on the side-walls depicting mountains, lakes & trees.

Union Cinemas were taken over by Associated British Cinemas(ABC) in October 1937, and as they were operating the much newer Regal Cinema, they closed the Pavilion Cinema on 28th May 1938 with Kenny Baker in "Mr Dodd Takes the Air" and Lilyan Tashman in "Wine, Women and Song". The building was later demolished and was replaced with offices which in 2009, are occupied by Champion Recruitment.