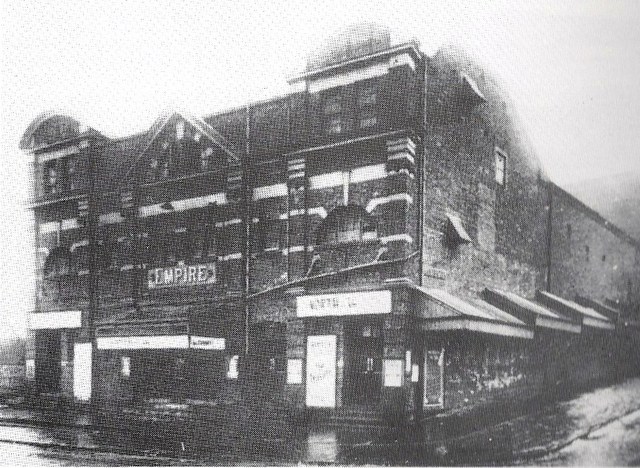 Located in Smethwick, Staffordshire now a district of west Greater Birmingham, on the corner of St. Paul’s Road and St. Alban’s Road. The Empire Theatre opened as a variety theatre on 5th September 1910. Designed by local Smethwick architect G. Bowden & Son in a Neo-Classical style. Films were screened as part of the variety programme in the early days. In 1919, the same architects carried out alterations when the stage was enlarged and the dressing rooms were extended. Originally there was seating provided in orchestra stalls, dress circle and upper circle. In 1924, alterations were made and it was converted into a full-time cinema from 6th October 1924.

In the 1930’s, the upper circle was removed, and it operated by the owners of the Windsor Theatre on Bearwood Road, Smethwick. The proscenium is 33 feet wide, the stage 28 feet deep and there were six dressing rooms. At this time a Compton 2Manual/5Ranks organ was installed (originally installed in the nearby Princess Cinema, Smethwick) and it was opened by organist George Hunt.

The Empire Theatre was closed on 13th April 1957 with Sophia Loren in “Too Bad She’s Bad” and Gina Lollobrigida in “Card of Fate”. The Compton organ was removed from the building and installed in Holly Lodge Grammer School. The Empire Theatre was converted into a DIY hardware store, which remained in use for many years. In recent years it has been converted into a Sikh Temple, known as Gurgwara Baba Sing Ji.

G. Hewittson who owned the company.. Apart from the DIY store also made sets for television and stage.. I remeber going there to look at some sets. The Iron was down (Safty curtain) with doorways knocked through to the stage..