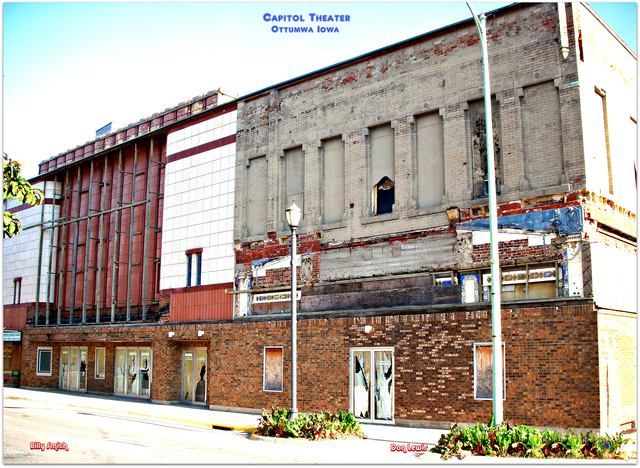 The Circle Theatre was opened around 1922. It was renamed Capitol Theatre in 1929 and by 1941 it was operated by Paramount Pictures Inc. through their subsidairy A.H. Blank. It was still open in 1950.

In the early-1980’s it was merged into the adjacent Capri Theatre, become the fifth screen for the Capri V Theatre.

The Capitol was never known or operated as the Capri.

Are you sure, Don? The comments on this page and on that for the Capri V certainly imply or say directly that theaters were merged, and even the picture you posted of the Capitol looks like it was merged into the theater next door by virtue of the continuous red brick lower facade.

No doubt the two theater buildings merged. This doesn’t mean the Capitol was ever known or operated as the Capri.

The Capitol was in operation by the late 1920s, but no firm date for its opening has been established. The building was just a hotel with what looked like retail space on the ground floor in the 1915 photo, but the conversion of the ground floor to a theater had taken place by the time the ca.1927 photo was taken. It might have been converted any time during that period.

For me it’s a tossup whether or not the Capitol should have the aka Capri V. It did operate as part of the Capri V, but then the Capri V’s entrance was at the Capri Theatre’s address, not the Capitol’s address. In any case, one of the main functions of including the aka’s on theater pages is to facilitate searches of the site. Anybody who has found the Capri V page with a site search will read there that it incorporated the former Capitol, and the Capitol’s page is easy enough to find from that page. I can’t see that it would be either helpful or harmful to have Capri V as an aka on this page.

However, the Capitol became part of the Capri.

Once I find where I put my photos I will put some up here. I took some pics back in July 2008 of the front of the theater after they stripped off the sheet metal facade. I suspect even 4 years later it looks the same.

I grew up in Ottumwa when the Capital was running. My brothers and I went to Saturday morning kids movies there. I was so amazed at how beautiful it was inside. You purchased your ticket out front from the booth then entered the doors to a oval shaped room to wait for the movie to open. It had 3 big glass movie poster light boxes with coming movies in them. Once we were allowed in the confession stand was right there. Then you either went left or right to the doors. There were 4 enterances on this floor. If you wanted the balcony you went up these big stairs on either side that split at the top. Depending on which stairs you took you would turn left to the balcony stairs or right to stairs that lead up to a large open room with couches. The bathrooms were there, also a coat heck room and I think a bar. The bathrooms were really something, they had 2 rooms. The first had mirrors with little stools so the ladies could fix their hair and make-up. The other were the sinks and toilets. If I remember right the carpet and curtains were red and black throughout the theater. It was quite grand. The little theater came along later and was just one level with a tiny concession stand. I was married Nd returned to Ottumwa with my children when they were in elementary school. I wanted them to see the Capital. I was shocked at how they chopped it apart into all those theaters and combined it with the theater next door. It was dirty and smelled terrible. So very sad to see that happen. I’ll never forget seeing those lights at night on the theater. My father worked next door at the Gas Company and I would go see him when he worked at night. We would walk out for dinner and see the lights as we went to the little pizza parlor across from the Capri. I don’t know the name …but there was a tiny theater next to the gas company which later became a taxi cab company. I know it was there because the dispatcher at the place took me back one night to see the old theater. The screen was still there but the seats were gone and it had a bad roof so there were bats.

I was the manager of the Capri V from 1991-1995. The Capri was split into 4 smaller screens by splitting the main floor in half and the balcony was also split in half and the Capitol was left as the largest theatre. They were all operated as one theatre with 5 screens. Im not sure when this was done but my guess is around 1987. I did a lot of research on all the theatres that had been in Ottumwa and had quite a few photos, but due to a house fire I lost all of my research. The building was built in the late 1800s and had been a clothing o store or something similar. I know above the theatre therer was a number of rooms and one single bathroom. It may have been a hotel but I always assumed it was like apartments, rooms rented out. One interesting thing is the building had another floor that was taken off at some point. I had pictures showing it with and without the extra floor. And upstairs there was a door with a sign above it saying Moose Club and the steps now end at the roof.

The Capitol Theatre, with 617 seats, first appears in The Film Daily Yearbook in 1930. However, I suspect that the building was converted into a theater earlier. FDYs from 1929 and earlier list a house called the Circle Theatre, with 560 seats.

The only other good-sized theater that permanently vanished from the listings after 1929 was the 395-seat Orpheum, which was down the block at 225 E. Main. It seems very likely that the Circle, which had been in operation at least as early as 1922, was renovated and renamed the Capitol in 1929.