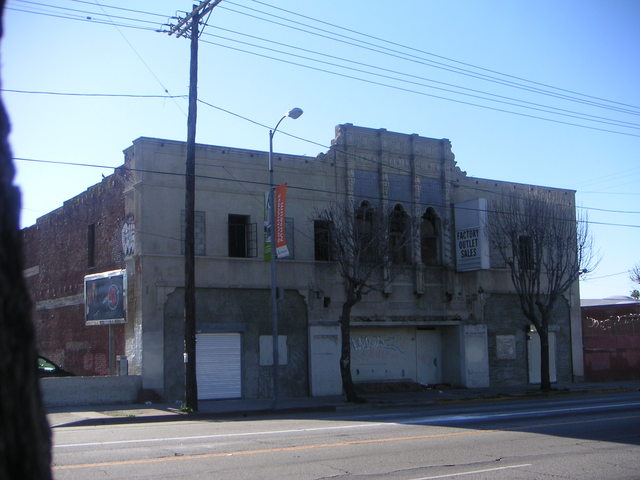 The Arroyo Theatre was opened on December 28, 1928 with Lon Chaney in “While the City Sleeps. It was equipped with a Robert Morton pipe organ which was opened by organist Walter Freed. It was a former Fox West Coast Theatre and was closed on May 19, 1957 with Gregg Palmer in "Zombies of Mora Tau” & Victor Jory in “The Man Who Turned to Stone”. It has since been used as a warehouse and restaurant.

I can’t find any recent information on the state of this building. I fear that it may either have already been demolished, or is in imminent danger of being demolished, to make way for a major mixed use development project which is associated with the Cypress Park-Lincoln Heights station of MTA’s Gold Line, which is a couple of blocks from the theatre at Avenue 26.

I just drove past the building today and the place has been reopened as a restaurant called the Cozy Corner. It has received something of a facelift; the formerly bricked-in entrance has been opened up with windows and front doors and the facade looks to have been cleaned up some. The restaurant wasn’t open when I passed by; maybe someone local (like ken mc?) could check it out soon.

The Cozy Corner was visited by the restaurant inspectors of the L.A. County Department of Public Health on February 1, 2008, and received a grade of 91 according to the very handy EveryBlock website. 91 is an “A” so I guess the place is (or was then) safe enough to eat at. Its address is listed as 3232-½ N. Figueroa. Thus far, the restaurant doesn’t appear to have been reviewed on any of the websites that do that sort of thing, so its probably nothing special.

The name Cozy Corner doesn’t suggest a very large restaurant, so I’d guess that it occupies only the front part of the building. The auditorium is probably still being used as a warehouse, with its entrance on the back street. As the street along the back of the building is called Arroyo Seco Avenue, I think the business using the auditorium might be Complete Brake Supply, listed at 3248 Arroyo Seco Avenue, though that might be in the building next door on the corner of Cypress Avenue.

I’m glad to hear that the building still exists, in any case.

Not so good, Joe. You’re supposed to get letter grades. When they start giving you numbers, no matter what the score, you’ve got some work to do.

I believe this theater was used by York Barbell as a west coast distribution center for their products. I was a driver for them in the 60’s. Tony Terlazzo was the manager and an Olympic weightlifting champion.

Pacific Coast Theatres Circuit opened the Arroyo Theatre on December 28, 1928 with Lon Chaney in “While the City Sleeps.” The venue featured a Robert Morton pipe organ with Walter Freed as its organist.

Closed as a movie theatre on May 19, 1957 with a great double-feature of “Zombies of Mora Tau” and “The Man Who Turned to Stone.”