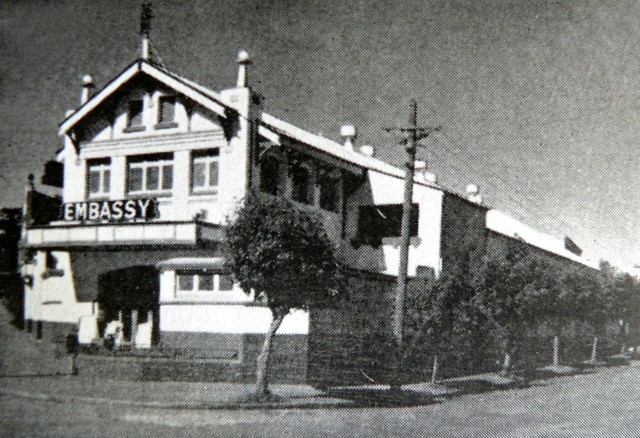 Located in the western Sydney suburb of Auburn, at the corner of Harrow Road and Queen Street. The Queen’s Theatre was opened on 21st November 1913. Initially all seating was on wooden benches on a single floor, but in 1914, tip-up seats were installed.

The Queen’s Theatre was taken over by the Western Suburb Cinemas chain in May 1930. It was closed on 10th May 1934, due to the chain opening their new Civic Theatre nearby.

The building stood unused for several years, then it was remodeled and re-opened as the 1,307-seat Embassy Theatre, which opened on 10th April 1937, with Jean Harlow in “Suzy” and Joan Blondell in “Three Men On A Horse”.

Taken over by Hoyts Theatres chain in March 1944, the Hoyts Embassy Theatre was closed on 3rd November 1958 with “The Unholy Wife” and “Another Time, Another Place”. The building had been sold to B.P. Australia Ltd. and they demolished the cinema and built a service station on the site. This too has recently been demolished and the site redeveloped.

Thanks for the picture-I remember going to the Embassy many times.However,it states it closed in 1958,but I can remember(and forgive me if I’m wrong or deluded)going to a special performance of the movie PT-109 circa 1963 with the school to celebrate the closing of the cinema!-maybe someone can enlighten me.