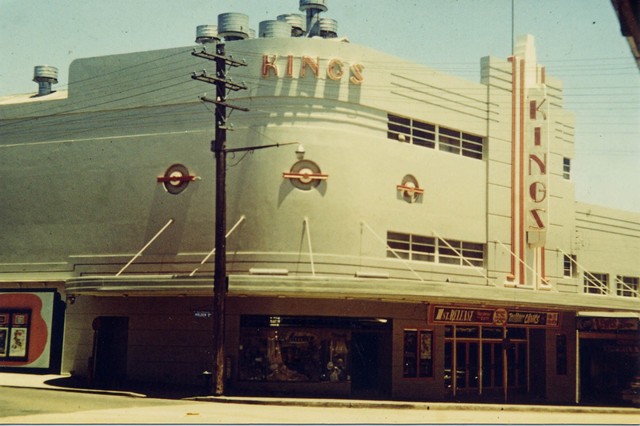 It opened on 21st July 1937. Designed by the noted architectural firm Crick & Furse in a Streamline Moderne style. A feature of the auditorium was its lighting, which consisted of over 1,500 feet of neon tubing located in coves.

The Kings Theatre was taken over by Greater Union Theatres in May 1946, and they continued to operate it until it was closed on 2nd May 1981. It was demolished in November 1981, and the site remained empty for many years. Today an office block named Ashfield Court stands on the site.

Photo is from 1959. The marquee sign reads “First release simultaneous with City”
The film shown is “Too Many Crooks” with Terry-Thomas and Sid James.

Why is this in the “Closed” and not “Demolished” category??

As somewhere I spent a lot of time as a child this was a sad loss. My Grandfather, through his time with MGM, was a close friend of the manager (known as Uncle Phil) who always took us up into the projection booth to see how the place worked. Saw lots of Disney films and always got free tickets to premiers. I remember the opening to one of the “Herbie” movies (sadly forget which one) and all the kids received a bag full of sweets, stickers and other Disney promo stuff. I think the last movie I saw there was “The Rescuers” in the late 70’s. Lots of great childhood memories in this cinema, even standing for the Queen either before or after the movie was shown!