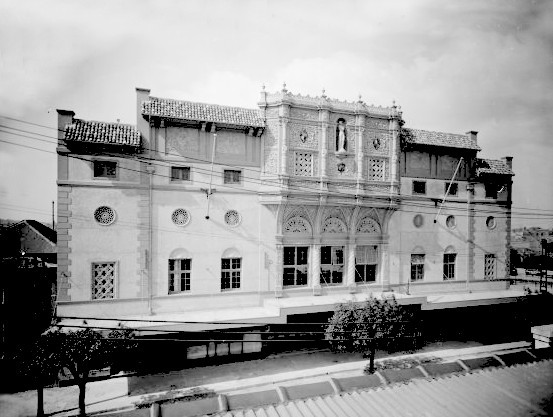 Located in the western Sydney suburb of Summer Hill. The Summer Hill Theatre opened on 29th October 1930. Designed in a magnificent Spanish Baroque style by architect Emile Sodersten. The facade looked like the ornately carved stern of a 17th Century Spanish galleon. Inside the 2,043-seat auditorium, decorated by interior designer Arnold Zimmerman, the proscenium and side walls contained false boxes on each side. There were large urns, and gargoyles, to enhance the atmosphere of the building. In the centre of the ceiling was a large saucer dome, which had a huge chandelier hanging from its centre.

Taken over by Western Suburbs Cinemas chain in 1939, it was refurbished, again to the designs of Arnold Zimmerman, and the seating capacity was reduced to 1,992. The Summer Hill Theatre had a ‘Gala Re-opening’ on 5th August 1939, with Cary Grant in "Gunga Din" and "Four Girls In White".

The Summer Hill Theatre was closed on 27th June 1959 with Kenneth Moore in "The Sheriff of Fractured Jaw" and "The Heart Within".

It re-opened under new ownership on 7th August 1959 as the Grosvenor Theatre, but closed again on 30th January 1960 with "Ask Any Girl" and "Booby Trap". From December 1960, it was used as a warehouse, until 26th January 1962, when it re-opened again, using the circle seating area only. Closed again on 13th August 1965. Another independent operator took over in in July 1966, and began screening foreign language films until its final closure in 1969.

The building was put up ‘For Sale’, and was sold in August 1970. It was badly vandalised, and when complaints came in about the ‘eyesore’ condition of the building, the local council ordered its demolition, which took place in 1970/1971. An office block was built on the site, which in early-2011, was empty and ‘For Sale’.