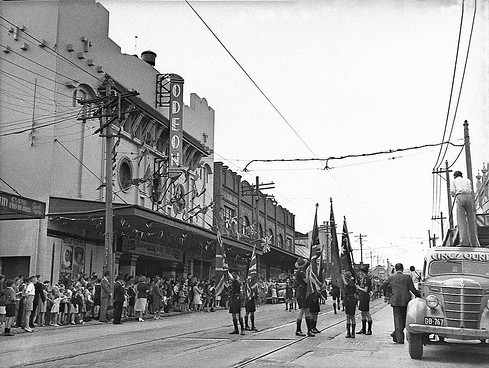 Located in the Sydney inner-city suburb of Petersham. Originally on this site was the Queens Theatre which opened in 1912. It was demolished, and Majestic Theatre was constructed, opening on 25th May 1921. Seating was provided in stalls and circle levels.

It was taken over by Greater Union Theatres chain in 1946, and it was re-named Odeon from February 15, 1947 with Norman Rydge, chairman/managing director of Union Theatres attending and officiating the opening. The interior was modernised in 1953, with the seating capacity reduced to 1,602, and it continued under Greater Union management until 1967.

New owners took over and it began to screen Greek and Italian films, being re-named Oreon Cinema. It reverted back to mainstream films in 1977, but closed within six months.

In 1979, it was converted into the Majestic Roller Skating Rink, and became very popular on ‘gay nights’. Roller skating continued until 2003, when it was closed after part of the ceiling plasterwork fell down. The building was shuttered and offered ‘For Sale’. The original painted ‘Majestic Theatre’ sign is still visible on the rear of the building.

In 2011, work began converting the former cinema into 27 apartments. This was completed in 2012. A market and restaurant operates from the ground floor level and a a bar is in the upstairs.

The Majestic Theatre/Odeon is Listed on the National Trust Register.

In 2003 the skating rink closed after part of the ceiling plasterwork fell down. Between 2011-2012 the former cinema was converted into 27 apartments. In July 2015 Tim and Cheryl Reen opened the Majestic Harvest restaurant and market place in the downstairs section of the old theatre. In 2016 the Harvest Bar opened upstairs above the restaurant and market.