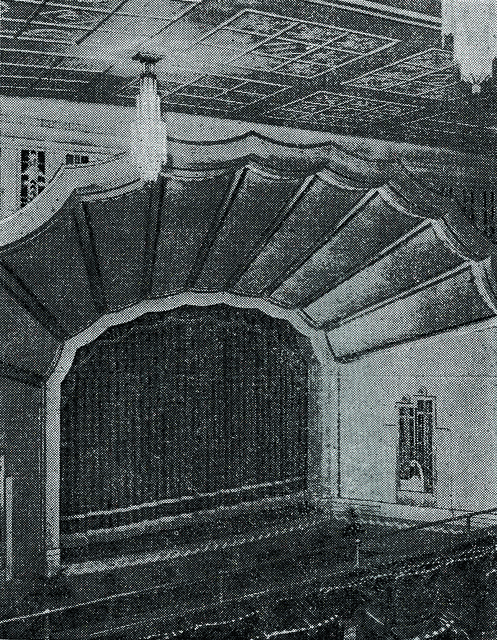 Located in the western Sydney suburb of Ashfield, on Liverpool Road near the corner of Knox Street. The De Luxe Theatre was opened on 7th April 1921. Soon after opening it was taken over by the Greater Union Cinemas chain, and re-named Union De Luxe Theatre. It was extensively re-modeled both externally and internally, in an Art Deco style by architect Guy Crick in 1934.

It was taken over by Hoyts Theatres chain in March 1944, and in the late-1940’s was redecorated, and the auditorium was given a new ceiling, which contained clusters of hundreds of light bulbs.

Hoyts De Luxe Theatre was closed on 24th September 1966, after running on a restricted opening time operation for several years. It was spasmodically re-opened to screen some foreign and occasional English language films until 1971.

The building was sold in July 1972, and was reopened by an independent operator. It was re-named Apollo Theatre, and continued a policy of screening foreign films, but the cinema was too large to make a foreign film policy a success. The building was sold again in June 1973, this time for redevopement. The Apollo Theatre was closed and was demolished in April 1974. A supermarket was built on the site. It too was demolished in 2015 and an apartment building was built on the site.

I stand to be corrected on this mainly in respect of year. The supermarket or “Ashfield Fruit World” was demolished about 2015 for a ground floor mixed retail (Chemist Warehouse, ANZ bank) and home units…oops sorry, apartment block.

I forgot to mention, that when this site was a movie theatre, instead of an elongated movie poster above the entrance to the theatre to advertise the current attraction, it used movable letters which were in front of a translucent white background. Behind the translucent background were lights (fluoro).