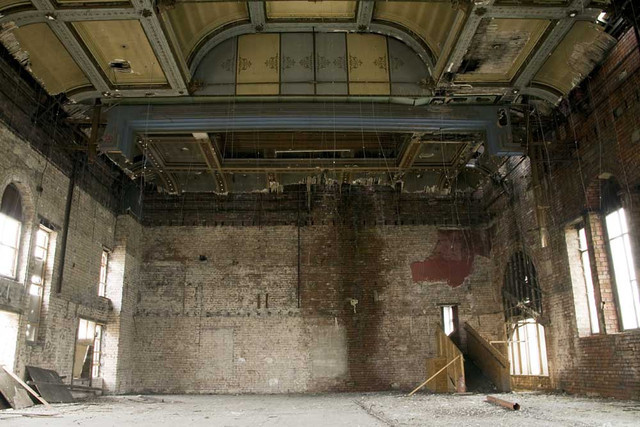 This impressive building was opened as the Pioneer Co-operative Society Building in 1879. It was designed by architects Henry Holtam and George Fox, who also designed the nearby Town Hall. It contained stores on the ground floor. The Pioneer Hall was located on the second floor of the building, with its entrance via 62 stairs located in the clock tower on the left side of the building. The stairs contain beautiful Victorian tiles on the walls, and in the restaurant area are fine examples of stained glass windows

Seating was provided in stalls and circle levels. The proscenium is 31 feet wide, the stage 25 feet deep, and there were four dressing rooms. Initially used as a variety theatre, by 1922, it was known as Pioneer Pictures, and included a mix of films and variety acts as part of the programme. There was also a cafe/restaurant for the convenience of its patrons.

It was known as the Pioneer Theatre by 1944. Taken over by the Essoldo Cinemas chain in 1960, it was taken over by the Classic Cinemas chain from 2nd April 1972, and became a Tatler Cinema Club, screening uncensored sex films. It was closed on 2nd June 1973. It then became a bingo club, which closed in recent years, and part of the space became a Pot Black Snooker Club. The building has been unused since at least 2008.

The Pioneer Building is a Grade II Listed building.

A vintage drawing of the Pioneer Building and some additional history here:
View link
Urban Explorers have documented the building in 2008:
View link)

I had the building “listed” while I was living is Dewsbury and won a Public Enquirey to have it preserved.