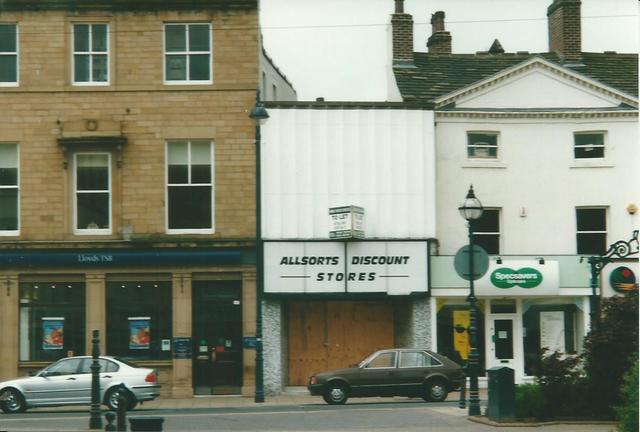 Located in Dewsbury, West Yorkshire. The Picture House on the Market Place was opened on 12th July 1913. It was taken over by the independent Lou Morris Cinemas chain and modernised in 1933, re-opening as the Regal Super Cinema on 25th December 1933, when a Compton theatre organ had been installed.

It was taken over by the Essoldo Cinemas chain on 7th February 1954, and was re-named Essoldo around 1955. Modernised in December 1968, seating was now provided for 361 in the stalls area, with the former circle area closed-off.

Taken over by the Classic Cinemas chain on 2nd April 1972, it was re-named Classic Cinema. It was closed in May 1969 for conversion to a twin screen cinema, which re-opened on 31st June 1969. There were now 330 seats in the former stalls and 144 in the former circle. By the mid-1970’s, it had been taken over by the Cannon Group and re-named Cannon. By the early-1990’s, it had been taken over by the Apollo Leisure Group and re-named Apollo Cinema. It was closed in 1993, and was last used as a Homeland bedding shop, the auditorium was demolished in April 2009. The narrow entrance and facade remain.

The entrance and facade of the former Apollo Cinema can be seen to the immediate right of Lloyds TSB Bank in this January 2009 photograph:
View link

A former work colleague says the cinema was owned by a distant relative by the name of Goodall and the silent film pianist was Mrs Mullard.