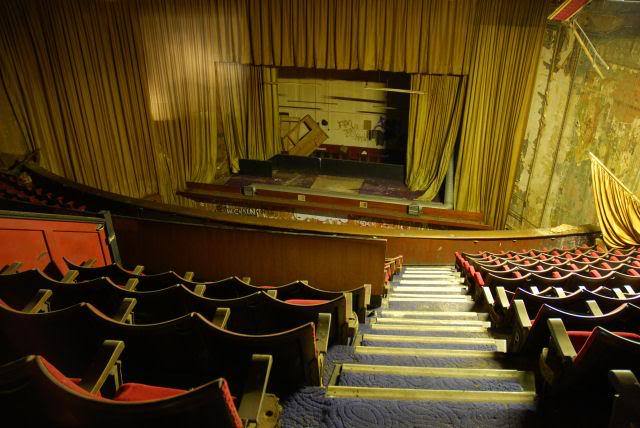 The Palladium Cinema opened on 18th March 1929 with Alice Terry in “Garden of Allah”. Seating was provided in stalls and circle levels. The proscenium was 35ft wide, the stage 20ft deep and there were several dressing rooms. It was the first cinema in Durham licenced to operate on Sundays. On Sundays they were restricted to one evening performance and the programme had to be approved by both the Chief Constable and the Bishop of Durham.

The Palladium Cinema was damaged by a fire on 16th January 1934. It was refurbished and re-opened on 5th March 1934 with Leslie Henson in “It’s A Boy”.

The Palladium Cinema was refurbished in late-1967, re-opening with “The Bible-In the Beginning”. The cinema closed in 1976 and operated as a Bingo Hall until 1982 when it became a Church.

Here are three photos that I took on April 9th 2011

Some recent interior photos can be found here on another forum.

In Nov 2014 it looks much the same and the religious posters are kept up to date on the shabby frontage.

I understand that this building is soon to be demolished to make way for student accommodation for Durham University. 600 seats have been donated to Beamish Open Air Museum for installation in the Grand Cinema Ryhope which is to be transplanted there :–

I believe that the lovely stained glass arched window within the deceptively small Front Of House of the Palladium (typical of many cinemas of the period which had small entrances leading to capacious auditioria) is to be restored and retained together with the rest of the facade.

In the 1960’s, after a very expensive modernisation, the stained glass window was the main feature of a large luxurious cocktail bar; it was adorned by blue velvet curtains matching the Royal Blue Axminster laid throughout the building.

Business dwindled at the Palladium following the rerouting of traffic in the late 1960’s (Claypath had been an important thoroughfare prior to this) leaving most business to the Essoldo, North Road, which, whilst very little was spent on it for years, latterly enjoyed a better location and Booking Policy.

In 1967 the Palladium was modernised and a luxury licensed bar was opened in a disused area above the entrance lobby adjacent to the circle foyer.

It was the second cinema in the North East to receive the wall to wall drape treatment, the first being the Queens Newcastle which, I am fairly sure, was the influence here.

Most of the drapery , as can be seen in the photos, has now fallen away from its track revealing what remains of the original elaborate decor, mostly chiseled away before the drapes were hung.

Below is a link to a site about the circuit of which the Palladium was part; its title rather unflatteringly alludes to the nickname of Thomas Thompson’s first ever cinema, the Cleveland Hall, Middlesbrough :–

Now sadly completely demolished including the facade with the arch and the stained glass window.

Two photos uploaded of the place in its pre – modernisation form. The one taken from the circle in 1954 shows the screen set well back from the proscenium. The house tabs, sadly, are drawn back and not visible here but they were the heavy theatrical style with appliqued stripes and looked rather splendid illuminated by the footlights.

I understood that the facade was to be incorporated within the new development (Student Accommodation) and it is a shame that this will not now materialise as the arched stained glass window used to look rather spectacular when illuminated and flanked by the two ‘Palladium’ fin signs at night time.

There are photos of the interior at this URL: http://www.28dayslater.co.uk/durham-palladium-theatre-cinema-14-10-07.t21496. With 30 years of dereliction it is debatable as to whether a church was actually using the cinema, perhaps the entrance hall if that.

1950’s shot uploaded of the then busy thoroughfare, Claypath showing the Palladium’s small and neat (but attractive) front of house on the right.