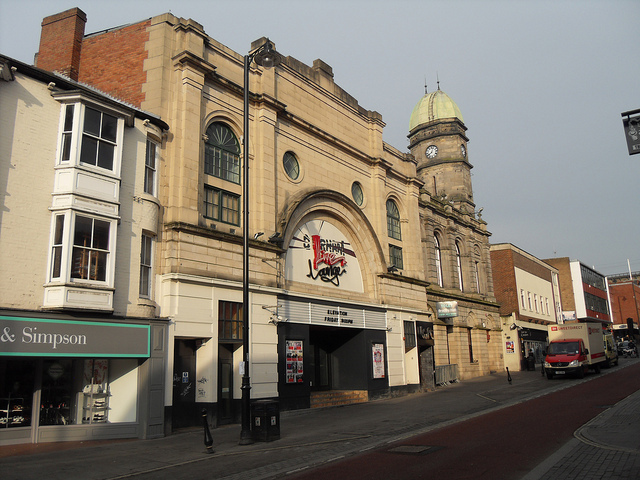 The 1.090-seat Regal Cinema opened on North Road, Durham on 27th March 1934 with Slim Summerville in “Her First Mate”. It was equipped with a Christie 2Manual organ which was opened by organist Herbert Maxwell. It was taken over by Sol Sheckman’s Essoldo chain in September 1945 and was re-named Essoldo in February 1947. Frome 2nd April 1972 it was taken over by the Classic Cinemas chain & re-named Classic Cinema. In 1979 it was twinned with 400 seats in the former stalls and 200 seats in the former circle. Cannon Cinemas later took over and operated using the Cannon name until it’s closure on 29th June 1990.

Robins Cinemas chain reopened the cinema on 19th July 1991 and it continued to operate until 5th January 2003 when the cinema was forced to close to make way for a new bar.

When Robins took over the upstairs screen was divided into two screens and the larger downstairs screen had a small 66 seat screen cut out of it, making it a four screen multiplex. The screen one seated 316, the upstairs screens each seated 96 and the smallest screen seated 66. Robins did have plans to create a screen five using the disused third floor of the building but as it would only seat around 50 people it was not financially viable.

Many of the cinema’s Art Deco style features remained intact, many of them hidden away in parts of the cinema which had been disused from wayback. In a bid to “modernise” the cinema in the 1970’s, many of the decorative features were painted out to make them blend in rather than stand out, on close inspection most of the detail was still visible.

Following a tough couple of years for Robins Cinemas Ltd., the chain went into receivership in 1997, closing all but three of it’s cinemas. Robins Bath, Camberley and Durham were bought back by the company’s owners as they proved the most profitable.

The company also owned the Prince Charles Cinema in London’s West End. Robins expansion thrived on the demise of Cannon Cinemas buying up ex-Cannon buildings across the country. All Robins buildings were ex-Cannon Cinemas. In 1998, plans were announced for a new multiplex in Durham, so Robins took the decision not to take out a long term lease. Nothing came of the multiplex plans but the building’s owner sought a new occupant, a Walkabout Australian Bar.

Following a court battle and several years of uncertainty, the cinema was finally forced to close in January 2003 to make way for the new bar, losing all it’s historic features and decor. In early-2010, it was fitted out to become a live music venue, with a seating capacity for 800. It then became a Chinese restaurant, which closed in 2014.

The Regal Cinema was built on land next to the Miners Hall and opened on 27th March 1934 with Slim Summerville and Zasu Pitts starring in “Her First Mate”. The architect was S. Stevenson, original seating capacity was for 1,090 and the building included a ballroom and billiard hall. It was equipped with a Christie organ which was opened by Herbert Maxwell.

The Robins Cinema closed on 5th January 2003 screening “The Lord of the Rings-The Two Towers”, “Harry Potter and the Chamber of Secrets”, “Die Another Day” and Sweet Home Alabama".

Photo of the cinema under Classic here :–

Here is a shot I took on September 28th 2008 I am posting this now because I am moving all of my images over to Flickr and closing my photobucket account.

Here are two photos from April 2011.
The view hasn’t changed much since September 2008.
The main difference being that the Pub/Night Club has changed name.

PS wgmewes and scruffywilber are the same person. I closed my old eMail account and couldn’t remember my password for this site so I set up a new ID.

Here is a Post Card from 1909 with a view of The North Road. You can see the tower of the Miners Hall.

In Nov 2014 it was empty again, with a short lived Chinatown Buffet the last user.

Photo of the Christie Organ uploaded.