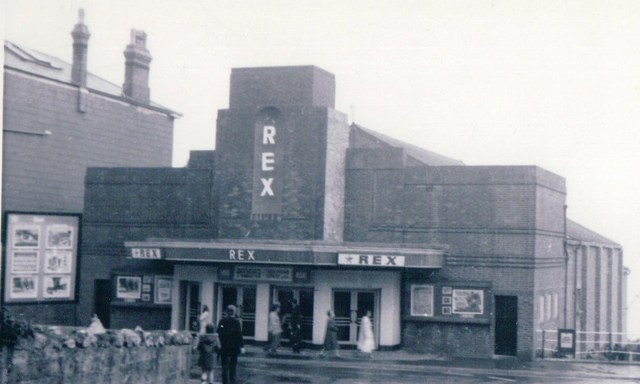 Located in Ventnor on the Isle of Wight. Entered at street level but the auditorium was built below the cliff. The Rex Cinema was opened in 1938 with Sonja Henie in “Lovely to Look At” and Will Hay in “Oh Mr Porter”. It was severely damaged by German bombs in 1941, and remained closed until it was repaired in 1946.

In October 1965 the Rex Cinema was taken over by the Leeds based Star Cinemas chain. The cinema is briefly glimpsed in the 1970’s film “That’ll be the Day”. The Rex Cinema was closed on 10th September 1980 with Dustin Hoffman in “Kramer vs Kramer”.

It re-opened as an audio-visual tourist attraction, which lasted a couple of years. Converted into an amusement arcade and an exhibition named ‘Enchanted Caverns’, it was destroyed by a fire in March 1993. The amusement arcade in the front of the building continued to operate until the remains of the roofless building were demolished in 2001.

Click HERE for a photo of the Rex Cinema whilst it was still on-film in 1974. When it was constructed the natural slope of the land away from the street helped give the auditorium a raked floor.

A pity that this isn’t a picture of a cinema? This block of flats with a “penthouse” on top is a tragedy for Ventnor and can never replace the Rex Cinema. What a cold and sterile building and how very much better this corner looked when the cinema was there.

When the Star Cinemas chain took over, the Rex only opened for the summer season.It closed on Sept 10th 1980 with “Kramer vs Kramer”.After the fire of 1993 the amusement arcade continued to operate until the building was demolished in 2001.