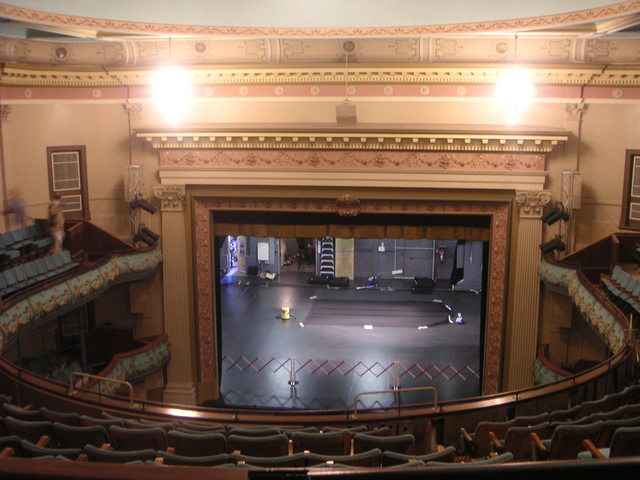 Opened as the Academy of Music on 7th June 1875 with the Comic opera “La Fille de Madame Angot” by Lecocq. Designed by George ‘Diamond’ Browne, it had a flat floored auditorium with a balcony.

Noted theatre architect William Pitt remodeled the theatre, and it re-opened as Her Majesty’s Theatre on 3rd April 1899. It now had a raked floor, a dress circle and a balcony. Interior decoration was by Hugh Paterson, one of Melbourne’s leading interior designers.

From 1911, Royal Pictures began screening films at the theatre, projected from the rear of the stalls. In 1916, a new projection box was installed above the dress circle foyer. Talkies were introduced in 1930, and a programme of films and stage attractions continued into the 1940’s, with an annual pantomime at Christmas.

Her Majesty’s Theatre was closed as a cinema in 1964, and was purchased by the Royal South Street Society, who saved it from demolition. It was renovated and re-opened as the Memorial Theatre in 1965, now presenting live theatre only.

In 1982, a Compton 3Manual/6Ranks organ was installed in the theatre. The instrument had previously been installed in the Union/Ritz Cinema/ABC, Warrington, Lancashire, England, UK. Hubert Selby (who had played the instrument in its original location) came over to Australia to open the organ on 12th June 1982. The organ chambers are located under the floor of the front stalls, with the sound directed into the auditorium via the orchestra pit.

This theatre might be the one seen in an Episode of The Doctor Blake Mysreries(season 2, episode 5 – Crossing the line), where the projectionest was found dead after the theatre was evacuted after a fure in tne projection room.

The movie screening in the episode was “Vertigo”(James Stewart).

Called the Rex Theatre(or cinema?)(made up name for the episode) in the episode.

The closure is temporary. Funding is in place to rectify the safety issues with the stage, work is due to start shortly and it is expected to re-open early 2019. Drainage issues are being resolved already, and that should minimise further deterioration. But there is a lot more that needs to be done, and funding for that is being sought.